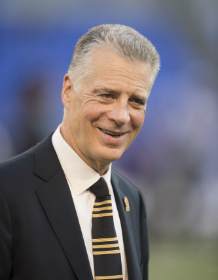 Back in 1981, current President and owner of the Pittsburgh Steelers American football team, Art Rooney II, spent the summer studying at Exeter as part of his Law degree at Duquesne.

On his return to the States he pursued a successful law career before following his father and grandfather into American football.

Between them, these three generations - Steelers founder Art Rooney, known affectionately as ‘The Chief’; former team President, Dan Rooney; and Art II himself – have made the Pittsburgh Steelers one of the most successful NFL franchises in history, currently tying with the New England Patriots for the most Super Bowl titles (6) and playing more Conference championship games than any other team.

Many of these achievements have come since Art took over running the team in 2003, but in spite of all this later success, he still fondly remembers his time at Exeter.

He said: “The courses at Exeter formed part of my degree and I was keen to get exposure to international law as well as global business. I took a class in what was then called EEC Law and it was interesting to learn about the development of this transnational organisation prior to its evolution to the EU. It feels particularly topical right now given the current political situation.

“I also have great memories of the campus. It was good to see another side of the UK other than London, which was the only place I knew at the time. I remember the weather being warm and sunny, and the campus was a beautiful, green space to enjoy. I had the opportunity to explore the city and to take trips into the countryside – locally but also as far west as Penzance.

Much of the Steelers success has been attributed to the open culture and team spirit the family have encouraged throughout the decades. Something that is often seen as distinctive amongst big sporting organisations.

Art said: “We have had a strong family ethos since the beginning of the franchise, and that permeates throughout the organisation. There are no guarantees in sport but if you have the right people and right attitude, you always have a chance of success. That approach comes from my father and grandfather before him, and I’m trying to carry it on.

“We’re also fortunate to have built a significant and very enthusiastic fan base. Our fans turn up in large numbers wherever we go, be it over to California or down to Texas, and it makes a huge difference to team morale.”

Interest in American football outside the United States continues to grow and there’s talk of the first international NFL team being formed here in the UK. Indeed our own team here at Exeter, the Demons, has just celebrated its 10th birthday, finishing second in the BUCS league and reaching the semi-finals of the Cup. So perhaps we’ll be seeing an Exeter alum in the famous black and gold in the not too distant future!

Art said: “For the NFL, although it is sometimes difficult to promote a sport in a country where it is not widely played, there has been good progress in building the fan base in the UK. I hope the interest will continue to grow and that we’ll be able to play in the UK again soon.”

The Pittsburgh Steelers kick-off the 2019 season against the reigning Super Bowl champions, the New England Patriots, this September and will be looking to add to the team’s impressive history.

Look out for the full interview with Art Rooney II in EXETER, our alumni magazine early next year.