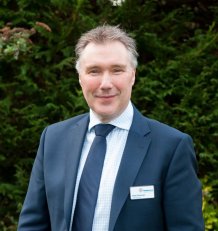 Exeter alumnus Peter Brennan (MBA, 2012) has been appointed Chief Executive Officer of Hospiscare, a local, independent charity which provides care and support to people with life-limiting illnesses and those close to them.

"Ever since I moved to Devon, I’ve been aware of the fantastic work that Hospiscare does. The support the charity offers makes such a difference at one of the most difficult times in our lives.” Peter said. “While I was working at Vapormatic, I had the opportunity to get involved as a corporate supporter, and the more I got to know about the charity, the more I wanted to get stuck in and make a difference! That’s why I started getting involved in more and more fundraising events, and then volunteering as a Hospiscare Trustee. When the CEO position came up three years later, I knew it was something I wanted to take on.”

Peter’s plans for the charity include expanding the Hospiscare@Home service into more areas. The service is an extension of Hospiscare’s existing services for patients with who want to stay at home at the end of their lives, and offers hands-on nursing care at home when required, any time of day or night.

Peter said: “I am genuinely excited to get started in this role. It’s a fantastic opportunity, and I really believe in everything the charity does. I feel extremely fortunate to have joined an organisation with such a highly skilled and dedicated team of staff, volunteers, trustees and partners and I feel privileged to be leading such a vital service for the people of Exeter, Mid and East Devon.

"In the longer term, I’m excited to be working with my colleagues towards the charity’s vision: ‘We want everyone approaching the end of their lives to receive the best possible care and to die well in their preferred place of care.’ There’s always more to be done, and none of it would be possible without the generosity of the local communities. We are so grateful to everyone who volunteers, supports and donates to Hospiscare in so many different ways.”