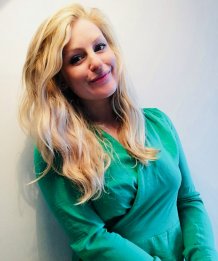 Alumna Alice Cracknell (Law, 2009) has set up her own social impact business based near Exeter. ORIGIN is a 100% not-for-profit sustainable fashion business inspired to drive humanitarian projects in the communities from which its fabrics originate; Mali, Ethiopia and Gambia. As well as employing local people in Devon the company has also become involved with many events in Exeter such as the Slow Fashion Show at the cathedral last year and the recent charity fashion show held at the university.

Alice said: “We had the idea of creating Origin in 2017. I have a background in marketing and business strategy and before starting Origin I worked for many global charities and organisations. My husband Tom is a doctor with a focus in tropical medicine and global health and has spent a large part of his career working in Africa.

“But both of us believed there was a better way of making a difference to communities in the developing world. When working in Mali we met talented artisans creating beautiful fabrics and we were inspired start a social business which could provide a more sustainable source of funds for humanitarian projects. So, combining our backgrounds and experience we put pen to paper and came up with the concept of Origin.”

100% of Origin’s profits fund community driven, needs-based projects which support the tribes that provide the fabric for the clothing sold. All projects are locally-led and sustainable so that they can have a long-term positive impact. Alice and her husband Tom spend a lot of time in the communities they work in and meet each person involved in the projects they invest in to make sure they are self-sustaining and make a real difference.

Alice said: “We are the UK’s first 100% not-for-profit fashion brand which is really exciting but also a challenge! We have built a circular social business - supporting artisans in Africa in the creation of traditional fabrics > producing ethical garments in the UK > using the profits to fund development projects in the communities from which the fabrics originate.

“A big issue for us at the beginning was communicating the concept of a social business. People traditionally believe that either you run a business or you run a charity - to those people the idea of an organisation which could use capitalism to fuel development in third world countries was confusing. Champions of this model, from Muhammed Yunnis to Leila Janah had shown people it was possible, but it is still surprisingly rare.

“Since we launched we have already generated enough profits to fund our first project - which is a great achievement for us in year one! We are now creating our new collection which will launch next month.”

Before setting up Origin, Alice worked in London as a Marketing Consultant and the experience has helped her make the business a success. As has her time at Exeter: “I studied Law at Exeter and I had a keen interest in Human Rights. I think my degree hugely influenced Origin and the route we have taken as a social business. I always wanted to embark on a career which would make a difference to people’s lives and I think with Origin I have finally found my calling!”