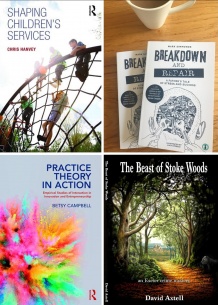 Congratulations to our alumni authors who have recently had their books published.

Mark Simmonds (French, 1986) has written a book about mental health called Breakdown and Repair: A Father's Tale of Stress and Success.

Mark's life was mapped out from the very beginning: go to university, climb the corporate ladder, marry and have children. But life isn't so easy, and success is hard to manage. After making what seemed like the right move in his career, Mark suffered from increasing levels of stress and anxiety, leading to his nervous breakdown. As the ground he'd stood on for years started to crumble, Mark did something he never thought he'd do: he stepped back from his work to focus on creating a balance in his life. But then his world fell apart for a second time when his daughter, Emily, became anorexic. Finding strength he never knew he had, Mark fought alongside Emily, both lost, both scared, but finding solace in one other. Breakdown and Repair tells the touching tale of a father saving himself by saving his daughter.

The book explores intra-team interaction in workplace settings devoted to technological breakthroughs and innovative entrepreneurship. By focusing on the observable language of teams in action, the book reveals the situated practices that teams use to enact their work, including the means by which team members verbally grapple with the uncertainties inherent in doing work in uncharted domains. It presents important findings about the conversational accomplishment of work and demonstrates the value of examining the practices of teams in action.

Chris Hanvey (English, 1971) has published an authoritative analysis of current services for children and young people in the UK.

Shaping Children's Services examines key indicators of children’s development, provides a breakdown of the economics of caring for children and presents both good and failing examples of children’s services. Drawing on European-wide data, it critiques the policies that have shaped today’s services, argues that the current system is insufficiently joined-up and outlines a radical new model for the integrated delivery of children’s care.

* Offer cannot be used in conjunction with any other offer or discount and only applies to books purchased directly via Routledge website.

The latest book publiashed by David Axtell (English, 1968), The Beast of Stoke Woods is set in 1980, mostly in and around Exeter including the University campus. The main character is a freelance journalist and amateur sleuth who has returned to Exeter, where he attended the university, after working in Fleet Street. He agrees to help a man called Harry, who is sleeping rough, to clear his name of a crime he did not commit. Harry also hopes to rekindle the love of his childhood sweetheart.

The book is on sale, in Exeter, at WHSmith, in the Guildhall Centre, and at the Tourist Information Office.