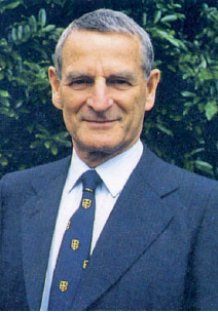 Sir Rex Richards FRS, FRSC, FBA DSc, Chancellor of the University of Exeter from 1982-98, has passed away at the age of 96.

Sir Rex was a distinguished chemist who was knighted in 1977 for his work surrounding Nuclear Magnetic Resonance (NMR) and whose scientific achievements were recognised with numerous other honours and awards. In 1954 he received the Corday-Morgan Medal of the Chemical Society and in 1977 the Chemical Society Award in Theoretical Chemistry and Spectroscopy. He was elected a Fellow of the Royal Society in 1959 and awarded its Davy Medal in 1976, and a Royal Medal in 1986.

Sir Rex attended Colyton Grammar School in East Devon and St John’s College, Oxford. He graduated with First Class Honours in 1945 and undertook research on infrared spectroscopy to obtain his D.Phil. in 1948.

He went on to become a Vice-Chancellor of the University of Oxford from 1977-81, and was also a Director of The Leverhulme Trust, a Fellow of the Royal Society and an Honorary Fellow of the British Academy for Humanities and Social Sciences.

Sir Rex became the Chancellor of Exeter in 1982 at a time when the University was continuing to expand, with the creation of a new library followed by a social and study centre for postgraduate students in 1991.

He also chaired numerous committees concerned with higher education, including an independent enquiry to understand why young physicians and dentists were not pursuing clinical academic careers.