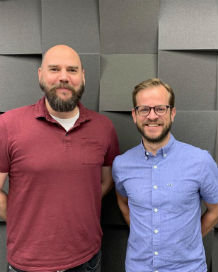 In 2000 alongside their final year at university three Computer Science students started a business designing and building websites for friends and families which became Optix Solutions based in Exeter. We recently caught up with Exeter Alumni and Directors Alastair Banks and James Dawkins (Computer Science, 2000) to talk about their last 20 years in business and the journey from bedroom to boardroom.

It was 1999, the time around Boo.com going bust and the Internet beginning to take off commercially. Three University of Exeter Computer Science Students including Alastair Banks and James Dawkins, who were in their second year had an idea, to create a business helping companies create websites. This might not seem that remarkable now but at that time many businesses didn’t have websites and people were questioning whether this ‘Internet thing’ was going to be a passing trend. Dialup connections were in place, Ebay and Google didn’t really exist and the three students in question queued up to collect their email twice a day from a bank of PCs.

In their first year in business and alongside their third year at university the three began to grow their business by designing and building websites for friends and families.

After graduating, they rented a house opposite the Imperial pub where they had a bedroom each and a fourth room for an office. They shared one dial up connection which was used for uploading and downloading their work, browsing the internet, making sales calls and even using a fax machine. Three directors became two and James and Alastair began to grow their company organically.

In 2001 they moved into their first office in Queen Street and before long they were employing staff and out growing the space they had. A second move in that building took them to 2007 where they took the plunge into leased offices in New North Road where they stayed for five years. They have now been at their current location in Marsh Barton since 2013 and employ just under twenty people. Their business has gone from strength to strength, picking up recognised names from the region and beyond. They now count among their clients The NHS (DPT), the University of Exeter, Crealy, The Met Office, Ashfords and Thirsty Work.

We recently caught up with Alastair who had this to say about the last 20 years in business:

“I don’t think we really knew where this would go when we set off. How could we, we were 19 and had never worked for anyone. The first five years were incredibly hard, living hand to mouth and we learnt an awful lot. The challenges are different now; building a culture, recruitment, processes and growth are some of our most difficult areas.

“We are incredibly proud to have created a homegrown business, supported by the University and turned it into one of the best known and respected digital marketing agencies in the region. Proudest achievements include working with the University, winning The Met Office after ten years of knocking on the door (persistence pays off), being asked to lecture on London Business Schools MBA program (for four years running) and recently being asked to represent the region in a government lead initiative to increase digital skills across the country.

“In truth every client win is a proud moment, knowing you are really adding value to their business and helping them grow but  the ones I’ve mentioned definitely stand out. Although it’s been hard work, I’d recommend any student with a passion and a dream to give it a go.”

Optix Solutions celebrated its 20thanniversary this month and have plans to double in size in the next five years. They are always keen to hear from students and alumni alike who are interested in moving into the digital space or would like help with their own digital marketing or websites.

You can find more about the company on their website at http://www.optixsolutions.co.uk or link up with Alastair on LinkedIn: https://www.linkedin.com/in/alastairbanks/