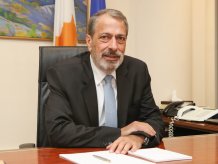 George in his new office

Alumnus selected as Cyprus’ Minister for Justice and Public Order

George Savvides (Law, 1982) was chosen by the President of the Republic of Cyprus, Nicos Anastasiades, this year for the important position of Minister of Justice and Public Order, after 35 years of practicing as a lawyer.

We recently caught up with George to find out how it felt to be selected for this role and the change in his career. He said that he was “deeply honoured to have been chosen, especially as I was never actively involved in politics until then” and views the appointment as an opportunity to serve his country and a “great challenge”.

This is in view of the fact that at present, Cyprus is undergoing a major reform in its judicial system, which is a task that falls under the responsibility of the Ministry of Justice and Public Order. George’s main goal whilst in position is to succeed in completing this reform which consists of constitutional changes, the creation of new specialised Courts, the increase of the number of judges, the introduction of third tier appellate jurisdiction in the judicial system etc.

George said that he’s keen to undertake this work as these steps “all aim to speed up the process of the administration of justice” which will make a considerable difference to the country. He hopes additionally to improve the efficiency of the Police Force and the Prison System which are both under his portfolio.

George’s time at the University of Exeter and in the UK continue to be a source of fond memories for him and whilst catching up about his recent success and career change, we also spoke at length about what a great time he had studying here. He particularly remembers having “the privilege and the honour of having been taught by both Professor Parker and Professor Lasok” whose names are now given to the moot room and the Law Library respectively. As well as winning a mooting competition, serving as President of Hetherington House (Duryard Halls), President of the Hellenic Association and, in his third year, chairing the Staff-Student Committee of the Law Department.

Since graduating George has visited Exeter on a number of occasions and is now pleased that his daughter Laura keeping the connection going by studying Psychology at the University of Exeter. Congratulations George on your success, we look forward to hearing about your progress in politics and welcoming you back to campus in the future.