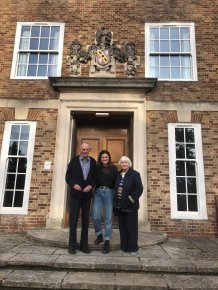 The third generation of the Colwill family to attend Exeter - Emma Grace - pictured with the first generation - her grandparents - outside Mardon Hall where Douglas Colwill stayed during his studies.

Three generations of alumnus Nick Colwill’s (Economics, 1986) family have studied at Exeter, including his parents, and youngest daughter who is currently studying here for one year. We caught up with him to find out some of the Colwill family's favourite memories of studying and living in Exeter.

“My parents Douglas Colwill and Shirley Christine Colwill (nee Foster-Culpeper, or Culpeper) met at Exeter and married in 1959. They studied Chemistry and History respectively and graduated in the late 1957 and 1958, when Exeter University had received its royal charter. They resided at Mardon and Birks Halls respectively.

“Speaking to my parents their significant memories are meeting each other at university and then getting married after graduating which was a very happy occasion. They’ve just celebrated their 60th wedding anniversary this September. I believe they greatly enjoyed their time at Exeter and that rubbed off on me.”

Nick stayed at Lopes Hall for his first two years of study and some of his favourite memories of his time at Exeter spring from that experience as well as the beauty of the Streatham Campus. He said that some of his highlights that he fondly remembers are “RAG week, inter hall fights with Hope Hall, playing social rugby, and spending time with friends in the Ram bar. There was always so much going on and it was a great time to be a student there. Lopes was a fantastic hall with a good warden, who I think was called John Glynn. I had many close friends there and stayed on for the second year as Lopes hall social secretary.

“As well as socialising I did spend time studying and whilst doing so I often spent time in the Amory building and the law library. I was at Exeter from September 1983 to June 1986, during the miners’ strike and the Thatcherite era, pre 1987 bust. Even for such a conservative university as Exeter was at that time, it was still very stimulating and exciting for student life. The balance of left and right politically probably gave a more balanced debate, than other more left leaning universities.”

Nick’s youngest daughter Emma-Grace has chosen to spend part of her studies at Exeter and started a one year course here this September. This course will dovetail with her other courses where she was studying at Auckland University and will be returning there next summer to complete her studies.

Nick says that Emma’s choice to study at Exeter “makes me feel very proud, and to see her on the steps of Mardon Hall (pictured above) where my father stayed is fantastic.”

The University of Exeter has certainly been a significant place for the Colwill family and even though Nick immigrated to New Zealand in the 1990s he says that it will continue to be a special location to the family as “my father and his family origins are from Cornwall, we have always had a strong affection with the South West of England. Who knows, maybe Exeter will continue to be part of the Colwill family for future generations as well?”