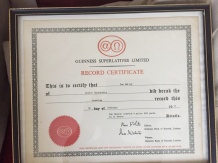 Crawling into the record books!

Next month at the London Marathon, numerous people will attempt to break World Records. Including our own alumna Jennifer Graham in her pyjamas!

However back in 1977 alumnus Ian Bailey (Geography, 1979) broke a very different kind of endurance record when he set about crawling more than nine miles for Rag Week!

Ian said: “I started at Exeter in autumn 1976 and wanted to do something to help during Rag Week. In the pub one evening, some friends and I looked at a Guinness Book of Records to see if there were any that we might be able to break. Most looked impossible, the only one that stood out was the one for crawling on hands and knees. The record then was 9 miles. ‘That’s only 36 laps of an athletics track’ I thought.

“The Rag Week Committee were keen for us to make the attempt and we were able to use Top Field, a large grassy area behind the sports centre. We checked Guinness rules and regulations and for an endurance event like this, you could have 5 minutes break every hour. Guinness could not send an official so we needed a ‘person of standing in the community’ to verify that we were doing this correctly: the head of the Sports Centre kindly agreed.

“A friend had a great idea of cutting up an old tyre to fit bits of rubber round both knees, filling them with foam rubber to soften the impact. Gardening gloves were good for the hands.

“On the day, 20 February 1977, conditions were perfect. It rained for much of the day so I could slide, reducing the friction of my knees making contact with the ground. Seven people started, by the 4-mile mark all the others had given up. Once I reached half way, I began to realise that I could do it. I then set targets: get to 5 miles; then 6 (that’s 2/3 of the way: great!). For the first few breaks, I could get up and walk around, but after 5 miles my legs began to lock and I could not stand. Friends would roll me onto my side, squirt some juice or water into my mouth, then set me on my way again.

“When it became clear to those watching that I would break the record, someone ran to the Ram and Ewe bars and alerted people over the tannoy. I therefore had a smallish crowd when I broke the record. I carried on crawling but it was late, nearly 9pm on a Sunday and I worried that everyone would just go if I carried on for too much. I therefore completed the lap I was on and called it a day. This was measured as 9 miles 228 yards. It had taken me 11 hours.

“One of my big regrets in life was not going on: being the first man through the 10 mile barrier would have been special. I was pretty sure I could have done it. And it might have meant that I got into the Guinness Book of Records. However, a man from Alaska broke my record shortly after, doing 9.5 miles. At the time, the Guinness Book came out every October. The record now is over 36 miles. I am not planning to come out of retirement…”

Did you complete a challenge for RAG Week at Exeter? Or maybe you also broke a World Record. We’d love to hear your stories, please do get in touch at alumni@exeter.ac.uk and we will share them. 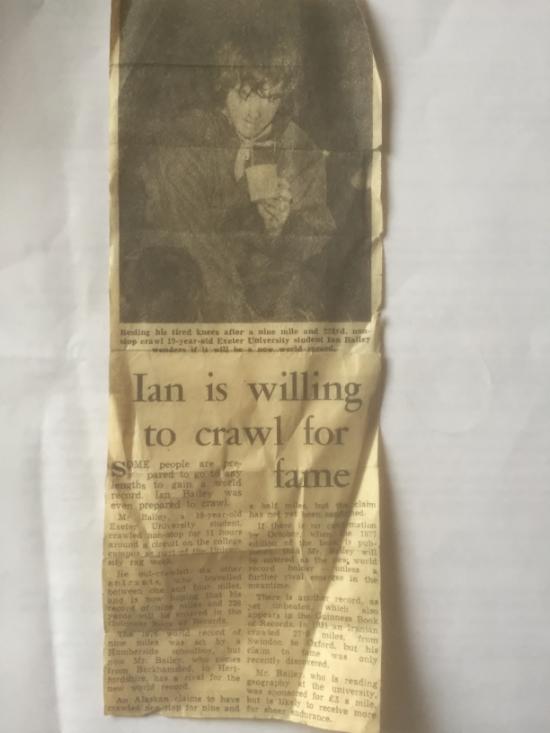