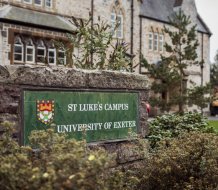 I was at St Luke’s Church of England Teacher Training College in Exeter as a student from 1961 to 1964.  I took Physical Education as my main and English as my subsidiary subjects, with compulsory English, Mathematics and Religious Education for all students.  In 1985 I returned to the campus, then part of the University, to complete an MEd degree and remained for the next twenty years as Administrator  and then Deputy Director of the Centre for Educational Development and Cooperation – an International Research Centre responsible for 20+euro projects in Poland, Ukraine, Uzbekistan and Mongolia, but mostly throughout Russia.

The Director of Physical Education at the time was ‘Jock’ Campbell, a man of medium hight with a barrel of a chest, a strong Scottish accent and stronger disciplinarian.  He made it clear that, although the College was a Church of England Training establishment, daily attendance at morning prayers in the chapel was not compulsory; yet every morning he was at the Chapel door taking roll call of his PE students.

My year stared with about 65 students but after the first year we were reduced to about 50.  Being Rugby orientated, it was not surprising that we had some major national representatives amongst us including Don Rutherford, Mike Davies, Phil Hall and a large contingent from Wales, including Dickie Uzzell, ‘the boy who beat the All Blacks’ with his famous drop goal for Newport.

Our first day was a prelude to Jock Campbell’s way of running his department.  Mid-morning we were all walked down to the swimming baths in Heavitree Road and were told that we could leave for lunch after swimming two lengths of the baths unaided.  After fifteen minutes, there were about twenty still left in the water – non-swimmers to varying degrees.  The number very slowly went down, some with sore fingers as Jock trod on them if anyone touch the side whilst doing a length.  It was said that there were still a few left in the water four hours later.

Then there was the gym practical at the end of the fist year; one test involved all taking it in turns to do various jumps over the box.  The person in front of me mistimed his jump and landed face first on the rubber mat.  ‘Get him off’, yelled Jock Campbell ‘he is getting blood on my mat… next jumper now’.

The small open-air on-site swimming pool was sometimes frozen over in winter but this made no difference to our swimming training.  A small hole was made in the ice at either end and under-water swimming continued; not great for one suffering from claustrophobia.

Latin prayers before meals, the yearly Luke’s/Loughborough Rugby Match at Twickenham, cricket in the Quad, inter-college sports competitions, teaching practice in schools throughout the south west, Matron and her sick bay, the ritual journeys to the ladies at Rolle in Exmouth and walk back to Exeter overnight and, most of all, the hectic last minute cramming and burning the midnight oil before the yearly exams.

But, regardless, or perhaps because of these and dozens of other stories I still recall after over fifty-five years,, it was a great college with outstanding staff and a real friendly atmosphere.

It was a very different St Luke’s I returned to twenty years later.  Not better or worse, just different.