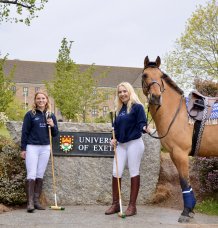 Thousands of alumni and supporters of the University of Exeter help current students through generous donations to the Alumni Annual Fund, by giving gifts of time or money in order to enhance the student experience.

The Alumni Annual Fund supports projects that demonstrate that they will enhance the experience across the wider student community, benefitting current and future generations and making Exeter an even better place to live and study.

A wide range of projects are supported by the Alumni Annual Fund every year which includes student societies and sport clubs such as the Exeter University Polo Club and the Exeter University Surf Club as well as projects like the Exefactor talent show competition who in the 2020-21 round received funding to help their projects.

The Polo Club wanted to make the sport more accessible to those who wished to try it; the club is deeply passionate about the sport but recognise that high equipment costs and limited opportunities to play can create a significant barrier to entry for students from less advantaged backgrounds.

They gratefully received funding for club equipment (knee pads and polo mallets –equipment which is essential to the sport) to limit the financial impact on members. The fund made the sport, and particularly matches, more accessible for all members as everyone in the club has access to the club equipment, including during training.

Club Captain Natalie said: “Exeter University Polo Club cannot thank the Alumni Annual Fund Project enough for helping us make the sport more accessible. With the financial cost of required knee pads removed, and more suitable mallets available, our members have noted that they feel more comfortable playing polo - particularly in tournaments. More students can play and, importantly, they can now do so safely and to the best of their ability.” 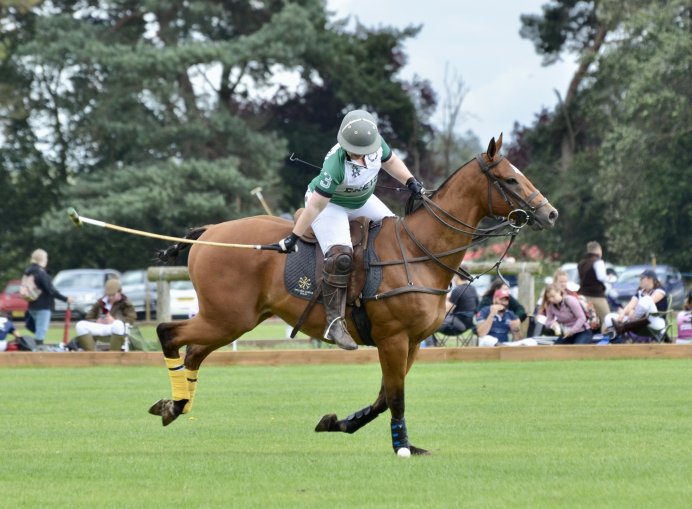 The Surf Club received funding for their project to involve as many women and girls in a surf development weekend of training and confidence boosting. The funding allowed the trip to be subsidised meaning it was more affordable and accessible to all,and supported vital work to diversify the competitive squads. During the weekend, the club went to Women and Waves, based on Fistral beach in Newquay for two nightsand had 2x2.5 hours in the water sessions with the surf school. The instructors were great as they were really detailed and catered for all abilities on the trip. The weekend also included video analysis with move-by-move breakdown analysis from the surf teachers, whichwas invaluable for the surfers’ progress.

The project leads Joseph and Florence said: “The aim was to improve confidence and skill of the club’s female surfers, and encourage more to enter competitions. This certainly happened with lots of very positive feedback from the weekend and this year at BUCs was one of our best so far. We had three women win all their heats, and one member who came on the weekend Kitty Brewer was the female BUCs champion. The women’s team placed 2nd!”

The Exefactor was a Talent Show competition which took place in June 2021, involving the students and societies at the University and was dedicated to connecting our community in Exeter. After a tough time of isolation during the COVID-19 pandemic and various lockdowns it helped to raise awareness of positive mental health in students, while alsoraising funds and awareness in aid of Meningitis Research Foundation (registered charity no. 1091105).

The project enhanced both the student experience at the University by inspiring peopleto connect with each other to create work, as well as with their community at a time of isolation; it increased confidence; provided a platform to create; and provided a platform to strengthen relationships. It also aided student success as the winners of the competition had a meeting with a Talent Agent, as well as being a great opportunity to raise money and awareness for Meningitis, as well as the profile of local businesses who connected, supported and sponsored the event.

The competition was viewed approximately 4,000 times on YouTube, involved more than 50 contestants and 10 local businesses, and the public was invited to watch the talent show and vote for their favourite act.

The funding received from the Alumni Annual Fund supported advertising materials for the event, venue hire for the ceremony, prizes, covid safety items, a winner’s trophy, and decorations for the event.

One of the winners, 1st year drama student Emma, said: “I loved every minute of the Exefactor! My friend and I entered at the end of first year simply as something to do after a year of zoom lectures and seminars! To our disbelief we won and were lucky enough to land a hours’ time with an agent, whose brains we could pick about the industry. Whilst this was amazing in itself, by far the best element of being involved with the Exefactor was the people I met along the way. After a pretty rubbish year of not being able to meet many people, it was a really special way to end the year. Thank you!”

You can watch the final video of the top five finalists on YouTube. Overall the project raised £3,100 for the Meningitis Research Foundation. 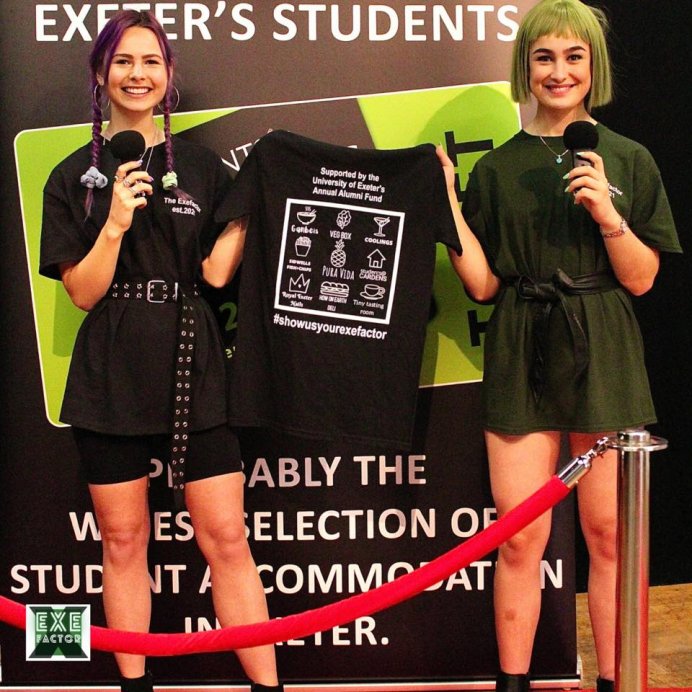 The committee and members of the Polo Club and the Exeter University Surf Society as well as the ExeFactor project team would like to extend their thanks to the Alumni Annual fund, and all alumni and supporters of the University who have donated to it and made their projects possible. You can find out more about the Alumni Annual Fund  and the wide range of projects supported by it online.