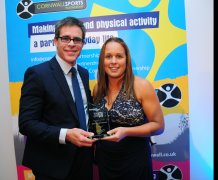 The University of Exeter was a main sponsor of this year’s Cornwall Sports Awards.

The annual event, held at The Headland Hotel, Newquay on Friday 4th November 2016 saw more than 300 of Cornwall’s dedicated volunteers, coaches, officials, organisations and young leaders from over 28 different sports come together to celebrate Sport in Cornwall.

Organised by the Cornwall Sports Partnership, the event, which is also sponsored by Truro and Penwith College, is now in its eleventh year. It was presented by Pirate FM’s Neil Caddy and pays tribute to the many volunteers who give their time and efforts to support our sports community and inspire the next sporting generation.

This sponsorship is part of the University of Exeter’s ethos of supporting sports at all levels. In Cornwall that also currently includes sponsoring Penryn U14 rugby, Penryn U14 Netball and Falmouth U14 and U9 football.

Professor David Hosken from the University of Exeter and one of our main sponsors said: “The University of Exeter is delighted to support these awards and I’d like to congratulate all the winners. I’d also like to thank Cornwall Sports Partnership for the evening’s celebration rewarding sporting achievements”.

This year 19 awards were presented.

The winners of the three awards sponsored by the University of Exeter were:

Linking with Sport England’s ‘This Girl Can’ campaign this year’s awards focused on ‘Celebrating Women in Sport’ in Cornwall. Guests heard from Coxless Crew Member Laura Penhaul, from Redruth, an inspirational women who along with five other girls rowed across the Pacific Ocean = 8446 miles, breaking two world records.

Guests also heard from Mellissa Reid, Paratriathlete from Porthtowan in Cornwall. Melissa Talked about her recent experience at the Paralympic Games in Rio this September where she won a Bronze Medal.

Cornwall Sports Awards organiser, Natasha Howard of the Cornwall Sports Partnership, said: This is a fantastic event, an opportunity to say thank you to all the wonderful volunteers who give their time freely so others can be active. We hope the evening inspired those who attended to continue volunteering and to motivate others to become volunteers. Giving your time to an activity you are passionate about is a hugely rewarding experience and you also get to become part of a community.

This Girl Can – Inspirational Women of the Year – Louise Mallas

Sportivate Project of the Year – Stand up Paddleboard for Women, Ocean Sports