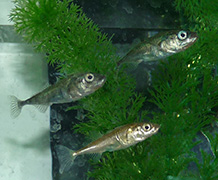 Through laboratory experiments with stickleback fish, the team found that regardless of how bold a fish is, a consistent individual is more likely to make the first move as a leader.

New research finds that fish with consistent and predictable personalities are more successful in social groups and help to build tighter and more coordinated shoals.

Oscar Wilde may have considered consistency “the last refuge of the unimaginative”, but researchers at the University of Exeter and Bristol University find that this personality trait is critical in animal social groups. It’s not just how you act, but how consistently you do this that determines the success and cohesiveness of the group.

A wide range of animals – from shoals of fish, to swarms of locusts, to zebras on the Serengeti – live in tightly-coordinated social groups. This can help them avoid predation and find food, but the collective coordination it requires can be a challenge.

It has been known for some time that individual animals have distinct personalities and clear roles within social groups. This can be important in coordinating the group. Researchers are now finding however, that individuals also show clear differences in how consistent they are in those personalities. Some are predictable and consistent, while others may be more erratic in their actions and reactions. New research led by Dr Christos Ioannou has shown that consistent personalities can be beneficial in social contexts.

With consistent personalities making both better leaders and better followers, groups composed of consistent individuals are more cohesive, allowing the group to make better decisions. It is also easier for distinct leader and follower roles to emerge, making the group more coordinated.

Dr Ioannou says: “This is the first time that advantages to being consistent have been shown in a real animal, rather than in a theoretical model. This is critical to understanding how personality, i.e. consistency of behaviour over time or situations, evolved.”

Dr Sasha Dall, at the University of Exeter, said: “Our work has broken new ground by demonstrating that behavioural consistency plays a very important role in coordinating behaviour in social situations with measurable real life consequences for the animals involved. This is something we had predicted theoretically but now we finally have some crucial evidence for.”

Consistency of personality has not often been considered in studies of group behaviour. So these results, which demonstrate its importance, are likely to pave the way for future behaviour studies which consider not just an individual’s average personality, but also its variation in personality – its consistency.

The study ‘Individuals that are consistent in risk-taking benefit during collective foraging’ by Dr Christos C. Ioannou and Dr Sasha Dall is published online in the Nature journal Scientific Reports.