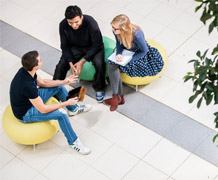 The University of Exeter is part of a South-West consortium of universities and colleges that has won £5.5 million in government funding

Consortium awarded £5.5 million to increase HE participation from disadvantaged backgrounds

The University of Exeter is part of a South-West regional consortium of universities and colleges that has won £5.5 million in government funding to inspire young people from disadvantaged backgrounds into higher education.

Institutions across Devon, Cornwall and Somerset have been awarded two years’ funding in the first phase of the National Collaborative Outreach Programme (NCOP), being launched by the Higher Education Funding Council for England (HEFCE) in January 2017.

With funding of £60 million per year, the programme will drive a step change in the progression into higher education of young people from disadvantaged backgrounds, including members of ethnic minority groups and young men.

To meet those goals, the consortium – under the name of Next Steps South West – will focus on Year 9 to 13 students in wards and schools identified as having presently low HE representation, using targeted interventions in an attempt to raise aspirations, achievement and awareness of HE.

Professor Tim Quine, Depute Vice-Chancellor (Education) at the University of Exeter said: “Widening access to higher education in the South West is a fundamental part of the University’s regional mission. At the heart of our approach is a commitment to identifying and nurturing potential of young people across Devon and Cornwall, irrespective of their background. Working collaboratively with our partners across the South West peninsula we will be able to drive progression to higher education offering ever greater opportunities to those in the region”.

Next Steps South West, which will officially begin working in January 2017 and is led by the University of Plymouth, brings together a variety of higher and further education providers, and its membership includes:

It will draw on the experience and expertise of existing consortia, such as the Devon Collaborative Outreach Network and Next Steps Cornwall, but also establish fresh approaches to outreach activities that foster new relationships with target schools at a local level.

This could include mentoring schemes, summer schools and parents events, but also see young people being invited to take part in events at universities and colleges with HE lecturers and students visiting local schools in return.

Funding from the NCOP programme was approved by the HEFCE Board following a competitive process for local consortia involving higher education providers, schools, colleges and other organisations such as charities and local agencies involved in education, careers and skills. A total of 260 higher education providers in England are involved, and the planned collaborations will ensure all 997 of the local wards identified in HEFCE’s gaps analysis will be covered.

Universities and Science Minister Jo Johnson said: “We are seeing record numbers of disadvantaged young people going to university and benefitting from the real opportunities that our world class universities can offer. This funding and the schemes that have been developed by universities will make a real difference to young people in key areas. In addition to this, we are legislating for a new transparency duty which will place a clear requirement on all universities to release more information about their admissions process and real incentives on all institutions to go further and faster to promote social mobility.”

HEFCE Director of Policy Chris Millward said: “NCOP represents a significant investment by HEFCE in improving the life chances of young people in some of our most disadvantaged communities. Our evidence has shown that there are young people in these areas who are achieving the qualifications they need to benefit from higher education, but are not currently doing so. The programme will ensure that they are better equipped to make the right choice for them by exposing the range of higher education options available and the careers they make possible.”