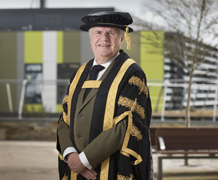 Paul Myners was brought up in Truro by his adoptive parents

The University of Exeter’s new Chancellor, Lord Myners of Truro, will come home to Cornwall to preside over graduation ceremonies in the county for the first time today.

Hundreds of students from the University’s Penryn Campus will receive their awards from the peer, who was brought up in Truro by his adoptive parents, a butcher and a hairdresser, and has gone on to build up an international reputation and a distinguished business career.

Cornishman Paul Myners, who was installed in his role in Exeter last week, has a home in Falmouth. He will take charge of ceremonies for students graduating from the Camborne School of Mines and the University of Exeter Medical School, and those being awarded degrees in renewable energy and biosciences. In the University’s Diamond Jubilee year, the graduates join an alumni community of well over 130,000, from more than 183 countries.

Lord Myners has chaired household name companies including Marks & Spencer, the Guardian Media Group and Land Securities. He was appointed City Minister in Gordon Brown’s government in 2008 during the height of the banking crisis, and joined the House of Lords as Lord Myners of Truro, in the County of Cornwall. He is now a crossbench member of the House. In 2003, he was awarded an honorary Doctorate of Laws from the University of Exeter.

University Vice-Chancellor, Professor Sir Steve Smith, said: “Graduation is always a proud moment for all of us involved in educating some of the finest graduates in the UK, as well as for them and their families. This year feels particularly special, as we welcome our new Chancellor in our Diamond Jubilee year. My warmest congratulations to everyone graduating this Summer.”

Lord Myners said: “It is an honour to preside the University of Exeter’s graduation ceremonies. They are full of joy and happiness and it is wonderful and very moving to be part of such a big day for students and their families.

“I’m proud to play a key role in a university which offers access to a first class education in my home county, and it will be particularly special to attend the ceremonies in Truro, the place where I grew up, and meet students who have chosen Cornwall as a place to study.”

For more information on graduation, including how to watch live streaming of the ceremonies, visit the University’s graduation website.