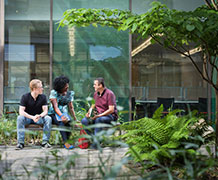 Exeter has been named the top university in the South West and 9th in the UK in the The Times and The Sunday Times Good University Guide 2017.

Exeter has been named the top university in the South West in the influential The Times and The Sunday Times Good University Guide 2017.

The University has also maintained its position in the top 10 of the national rankings, securing equal 9th position.

The league table cites Exeter’s position as being “among the leading universities” for student satisfaction, world-class research, varied new degree courses, international focus and career development and opportunities as reasons behind Exeter being a fixture in the top 10 of the leading guide.

This is exemplified by Exeter’s position as having the highest overall satisfaction rating among students in the Russell Group, according to the National Student Survey, while its burgeoning international reputation saw the University positioned 35th in the world, 6th in UK and 8th in Europe in CWTS Leiden Rankings 2016.

University of Exeter Vice-Chancellor and Chief Executive Professor Sir Steve Smith said: “I am absolutely delighted that Exeter has once again been recognised as the best university in the South West, as well as maintaining our place in the national top 10 rankings.

“It is very pleasing that our world-class research conducted by our academic communities in Exeter and Cornwall, coupled with our commitment to deliver the very best learning for our students has been recognised once more.

“It is a proud day not just for everyone associated with the University, but also for our neighbours and the wider South West community, as well as our many partners here in the South West and across the globe, who are crucial to our success.

“With global-leading new initiatives such as the Living Systems Institute opening soon, coupled with our ability to attract the very best staff and students from across the world, Exeter is well-placed to strengthen our position among the very best universities not just nationally, but worldwide.

The Times and The Sunday Times Good University Guide 2017 provides students and their parents with an invaluable first reference point on the path to finding a university place. It contains full profiles of all universities and the leading colleges of higher education.

In its citation, the guide referenced the “much-improved results in the 2014 assessments of research”, with more than 80% of a large submission to the Research Excellence Framework rated as world-leading or internationally excellent and with clinical medicine, psychology and education producing particularly good results.

It also praised Exeter’s “longstanding international focus”, exemplified by a growing range of four-year programmes “with international study”. All students are offered tuition in foreign languages and even some three-year degrees include the option of a year abroad.

The Guide also recognised that career management skills are built in and students have a wide range of work experience opportunities. The Career Zone has been expanded to increase career support and internships, while the university’s Exeter Award provides official recognition of extracurricular activities. The number of student volunteers is among the highest at any university.