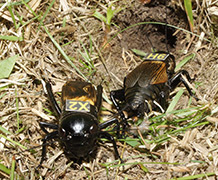 The social lives of crickets are similar generation to generation, even though the insects can’t learn directly from their mum and dad.

New research shows cricket populations have innate habits, so their relationships are organised with each other in similar patterns every year, even though generations never overlap.

“Big Brother” style cameras have been used to record how crickets mate and fight with one another, producing patterns of relationships that form a social network which is remarkably similar each year, even though they can’t learn from their parents.

In fields all over Europe, there is a new generation of crickets each year, with the adults reproducing before they die in the summer, and the offspring hatching as the adults start dying. The young crickets dig their own burrows and survive in them over winter.

Successive generations never meet, but by the time the crickets become adults in the spring they have the skills to fight and mate with each other. A consistent social structure exists because the crickets follow similar innate rules each year, possibly as these rules best allow them to thrive.

Researchers from the University of Exeter have been observing all the crickets living in one meadow in Northern Spain since 2005. They use cameras to constantly record cricket activity, using infrared illumination at night. Each camera is trained on a burrow, which crickets dig to hide from predators.

Crickets start to move more often between burrows after they become adults. When this happens the researchers fix a unique plastic tag to each cricket so they can identify them and then they release them back to the burrow.

The crickets spent the rest of their life in front of the cameras, sharing their burrows with members of the opposite sex and mating with them. They fight with members of the same sex when they approach the burrow. Females tend to move more than males, but both sexes spend some time guarding a burrow and moving between different burrows.

Researchers were able to completely analyse video footage from six years of observations allowing them to witness social networks between individuals. Members of the public can take part in the research by helping extract information from the thousands of hours of video the team records at the Cricket Tales website.

Dr David Fisher, the lead-author of the study, said: “Crickets appear to have innate rules for social life, and they don’t get that information directly from their parents.

“Despite variation in various factors such as environmental conditions, the fundamental structures of these networks are similar each year. This means that the social structure of the population is conserved over evolutionary time.”

The researchers found that any difference in the social structures of crickets was caused more by the size of their population rather than evolutionary changes.

Tom Tregenza, Professor of Evolutionary Ecology, who has been studying the crickets for over a decade, said: “Social networks have been applied to dozens of animal species. Our study is unique, in that we have been able to check whether networks are really stable. If they aren’t stable, they won’t be much use for predicting how populations evolve.”