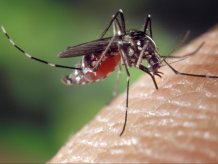 Dengue is a mosquito-borne tropical disease caused by the dengue virus.

The first licensed vaccine for the potentially life-threatening dengue virus should only be used in moderate-to high impacted regions, new research has predicted.

A team of international researchers, including Dr Mario Recker from the University of Exeter, have looked at the impact and cost-effectiveness of the vaccine, called Dengvaxia, under a host of varying conditions.

The team found that in areas that have high-levels of dengue infection, a routine vaccination programme could reduce the burden of dengue disease on the local population by up to 25 per cent and could potentially be cost-effective in these settings.

However, because the vaccine appears to act similarly to natural infection, its use in areas of low-density dengue disease could potentially see hospital rates increase, significantly reducing any benefit to the local communities.

The team, led by the London School of Hygiene and Tropical Medicine, suggest that Dengvaxia would be most cost effective, and best reduce the impact on populations, only when infections with dengue are most prevalent.

The study is published in the leading journal, PLOS Medicine.

Dr Recker, an Associate Professor in Applied Mathematics at the University of Exeter's Penryn Campus said: “These results demonstrate that although Dengvaxia could reduce the burden of severe and life-threatening disease in countries that suffer most from dengue, it is unlikely to have a major impact on its widespread transmission.”

The international research team used dynamic mathematical models, based on vaccine trials data and combined with theoretical expectations of how the vaccine works, to evaluate its impact and cost-effectiveness over a 30-year period after vaccination.

They suggest that, in areas that have a moderate-to-high levels of dengue within the population – that is, where at least 50% of the children are infected before they reach 9 years of age -, a routine, three-dose vaccination policy would reduce the burden of dengue disease by between 6–25%. The researchers also predict the vaccination would prove to be a cost-effective strategy – but only if priced competitively.

However, in settings where dengue infections are less common, the team identified a risk of potential increase in hospitalizations for dengue disease. This is because the vaccine appears to ‘prime’ individuals who have not yet been in contact with dengue to develop more severe disease symptoms when they get infected with the virus next.

These findings were an important contribution to the evidence base that led the WHO to recommend countries to consider the use of Dengvaxia only in settings with a high burden of dengue disease.

The authors say: “Our results can guide countries on the general suitability of Dengvaxia introduction; however, local factors related to treatment costs, intensity of dengue transmission and age groups particularly exposed to dengue will need to be considered.”