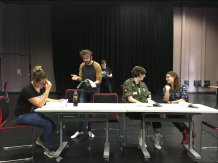 'Hope Venture' will be shown at The Poly, Falmouth, on the 9 and 10 March.

University of Exeter student, Arthur Greenhalf, has written a play about madness, human agency and the relationship between art and audience which will be on stage at The Poly, Falmouth on 9 and 10 March.

In his first year of studying English on the Penryn Campus, Arthur joined Feccles, the drama society, which schooled him in what goes into putting on a play. With a little encouragement from his lecturers he wrote two mini-plays which received top grades and gave him the confidence to try something bigger.

This comedy drama is about a phenomenally successful TV show called Hope Venture. Hope Venture’s success has swept the globe – politicians quote it, it is known as "The Harry Potter of cartoons", and there is an internationally-celebrated Hope Venture Day which marks the release of the first episode. It is widely regarded as the most important and influential piece of media in history. The story opens with the news that Creator and Head Writer Aidan Smith has just cancelled Hope Venture – and nobody knows why.

Arthur explains how his time at University has set him up for his career; “I want to be an author and performer; university has given me the time and opportunity to explore these interests, get my work performed in an actual theatre, and get back into acting – I didn’t take drama at GCSE or A-level, but Feccles has allowed me to return to it. Additionally, spending so much time studying famous novels, plays and texts has versed me thoroughly in what makes a good story. I already feel worlds wiser, and I haven’t even hit third year yet!”

The cast, creative team and Arthur have poured their hearts into this production, and it would be a great shame for anyone to miss out on the amazing performance they’ve put together for you. Tickets are on sale now and are just £8, or £5 for students.