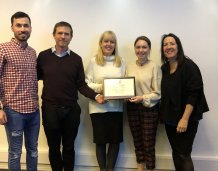 The University of Exeter has achieved a ‘University of Sanctuary’ award in recognition of the work it does to support forced migrants.

Led by the City of Sanctuary charity, Universities of Sanctuary is an initiative that celebrates the good practice of universities, welcoming sanctuary seekers into their communities and fostering a culture of welcome and inclusion for all.

Exeter is now the first university in the south west, and the first institution in Exeter, to be recognised with this accolade.

To gain the Sanctuary award, organisations must demonstrate that they have worked to develop a culture which is welcoming and inclusive within the institution, as well as the local community. They then must pledge to develop this even further over the next three years.

Exeter supports forced migrants to study at the University in a number of ways, including it’s Sanctuary Scholarship scheme. The scheme provides displaced people who cannot access student finance a chance to study at Exeter by covering their tuition fees and living costs.

The University also has an active STAR society (Students Action for Refugees) within the Student’s Guild, inclusion of modules relating to forced migration in many of its programmes and provides a range of outreach work by students and staff with forced migrants in the local community, such as working with Refugee Support Devon.

Professor Janice Kay, Provost and Senior Deputy Vice-Chancellor at the University of Exeter, received the award on behalf of the University on 20 November, at an event on Streatham Campus where staff and students had the opportunity to hear about some of the work of the University to nurture a culture of welcome towards refugees and asylum seekers.

Professor Kay said: “We are absolutely thrilled to get this award.

“We have been working with forced migrants, refugees, and asylum seekers for a number of years now, and we are on a journey as a university to provide higher education for people from different places and experiences with a real need, thirst and ambition.

“To get this award as a University is an amazing achievement. Lots of people have contributed to it and it’s great for our community.”

Nicola Walters, South West Regional Coordinator at City of Sanctuary, who presented the award to Professor Kay, said: "Giving equal access to university and higher education provides people seeking sanctuary that chance to integrate and build a new life in this country. Getting those qualifications opens doors for them.

“The University of Exeter has been given this award to recognise the work that they’re already doing across the University but they’ve already said that’s only the first stage of their journey. They want to look at what more they can do, not just in terms of the scholarships but also in terms of outreach work in the community, research, teaching and a lot of the student-led work that’s been happening.

“It’s been a very student-led development at the University of Exeter which is a fantastic thing to see. Students are wanting to support other students going through difficult circumstances.

“Congratulations to the University of Exeter on this achievement - I am looking forward to working with them as a University of Sanctuary in the future.”

The event also showcased a private screening of a short film titled ‘Lost in the Noise’, by Harry Bishop, which documented the experiences of Sajjad Jabarkhel, the first sanctuary scholar to graduate from the University.

Sajjad, who grew up in Afghanistan, came to the UK as an asylum seeker aged 12. He recently graduated from a BEng Mining Engineering and a MSc in mineral processing at the Camborne School of Mines, based at the University of Exeter’s Penryn Campus.

Sajjad said: “All the hard work was worth it, because the opportunity that I had was something that others wish for. I had access to education. To me it was a blessing, I loved every bit of it.

“I managed to get the scholarship, complete my degree and get elected to Undergraduate Education Officer and President of the Students Union on Cornwall campus.

“The Sanctuary Scholarship is the sole reason for my achievements. If I wasn’t at the University I wouldn’t have got anything. There’s so many people that contributed to it in so many ways. That’s why I wanted to be that live example to thank people and say this is the impact that you make. I’m incredibly grateful for where I am.

“I was stateless not hopeless and I am so thankful for the opportunities university gave me and proud of what I have been able to achieve.”

To read more about the University’s Sanctuary Scholarships scheme and find out how to donate, visit: https://exeter.hubbub.net/p/sanctuary/