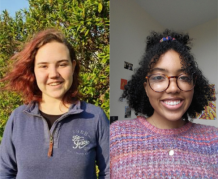 Exeter students embark on a relay walk for climate justice

Two students from the University of Exeter in Cornwall are taking part in a relay walk from St Ives to Glasgow, to campaign for climate justice.

The ‘Relay to COP26’ started in St Ives where the G7 summit is being held and will end in Glasgow to coincide with the planned COP26 event in October. Taking place from the 1-12th November, this will be the 26th UN Climate Change Conference of the Parties (COP26) and will include the gathering of heads of state, climate experts and negotiators to discuss action to address the climate emergency.

Organised by the ‘Young Christian Climate Network’, the relay is calling for greater action from world leaders at COP26 to address climate injustice. The event will involve walkers completing sections of the long route, before handing over in a relay to the next group.

Davina, a joint honours English and Environmental Science student coming to the end of her second year, is both a Lead Walker - walking for four days on the Falmouth to Fowey leg - and the organiser of the Truro Cathedral send-out service, which will feature a blessing for the walkers.

"The UK has a responsibility to help the people and its ecosystems it has exploited to adapt to the effects of climate change,” she said “YCCN is campaigning for the government to act on this responsibility during the G7 and COP26 conferences by committing to better climate finance and debt relief policies."

Lucy is an English BA Student coming to the end of her second year. She found out about YCCN through her flatmate, Davina, and really wanted to get involved. Lucy is joining Davina as a Lead Walker from Falmouth to Fowey.

"So many people in the world seem to be suffering due to the climate crisis,” she said. “Sometimes it feels like we can be so powerless in the face of something so huge and damaging, so doing this is really important to me. I want to be part of making a difference for both our planet and the people on it."

The ‘Relay to COP26’ started in St Ives on Monday 14 June and will journey through Falmouth on Tuesday 15. If you would like to find out more details or how to take part check out the Young Christian Climate Network website here.