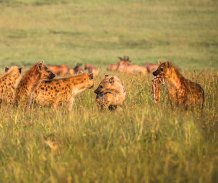 It makes evolutionary sense for long-lived animals to have complex social relationships – such as friends and enemies – researchers say.

In the new paper, University of Exeter scientists argue that natural selection favours complex social structures among slow-living animals – meaning that knowing their friends and enemies is easier for animals with longer lifespans, and helps them live even longer.

Meanwhile, fast-lived species should only bother with such social relationships if it increases their chances of reproduction.

"Slow-living species can afford to invest in social relationships, as they live long enough to enjoy the pay-offs," said Professor Dave Hodgson, Director of the Centre for Ecology and Conservation on Exeter's Penryn Campus in Cornwall.

"There is strong evidence that strong social bonds are beneficial for survival in slow-living species, including humans.

"We suggest there is a 'positive feedback' – certain social behaviours lead to a longer life, and longer lifespan promotes the development of social bonds."

Professor Hodgson said there is "growing evidence" that differentiated social relationships have a bigger positive effect on survival than on reproduction.

As a result, fast-lived species do not gain the same evolutionary advantages from social relationships as slow-lived species.

Examples of fast-living species could include shrews and crickets, while animals such as mongooses, badgers and hyenas, and indeed humans, have a slower "pace of life".

Dr Matthew Silk, also of the University of Exeter, said: "If we want to understand more about social relationships and lifespan, we need to think about the relationship between the two.

"More research is needed to explore the social structures of wild animals.

"This could help us understand the links between social bonds, survival and reproduction."

Professor Hodgson said: “Our proposal, that strong and weak social bonds will be more prevalent in slower-living animals, is theoretical.

"We know a lot about animal lifespans, but we know too little about the social structures of many types of animal.

"If we are right, then social bonds could really be key to longer life."

The paper, published in the journal Trends in Ecology and Evolution, is entitled: "Differentiated social relationships and the pace-of-life-history."