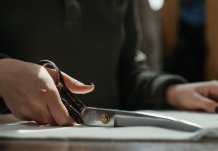 Knowing more about how clothes were made can have a transformative effect on people’s relationship with fast fashion, a new study shows.

Learning about clothing production, and how to make, mend and modify garments, can encourage adoption of more sustainable clothing choices, such as buying fewer new outfits and repairing.

The study shows people won’t be persuaded to avoid fast fashion if there are attempts to “educate” them – those involved in the study said they felt it was alienating and discouraging.

The research was part of the Arts and Humanities Research Council funded “S4S: Designing a Sensibility for Sustainable Clothing project”. Academics followed participants for nine months.

Experts from the University of Exeter and Wolverhampton University asked people in Cornwall and the West Midlands how they felt about clothing and acted when they shopped, and if workshops would have an impact on their feelings, thoughts and actions. As part of the study they partnered with community venues, consultants who delivered workshops, videographers and the NGO, Fashion Revolution.

Many of the participants in the West Midlands had previously worked in the garment-making industry.

Participants in Cornwall learned about zero waste and learned to knit using wool from unravelled old knitted garments. Those in the West Midlands turned old men's shirts into aprons that the Cornwall group embellished in their make-do-and-mend workshops. The West Midlands group engaged in visible mending, which inspired the Cornwall group to upcycle and reinvent otherwise useless charity shop discards.

Conversations over the course of the workshops were recorded, and further discussion was facilitated by the research team, both individually and in groups. Participants also kept reflective diaries and participated in short reflective videos.

The workshop tasks were designed to get people to think about the life of clothing and their materials, the ethical questions raised by fast fashion, and teaching skills to make, mend and modify clothes.

Participants also took part in wardrobe edits at the beginning and end of their time taking part, estimate the number of items in their wardrobes, before making an accurate count of the number of them.

The study, published in the Journal of Material Culture, says to encourage more sustainable behaviour people need to be given the space to learn rather than be taught “approved values and behaviour”. One participant from West Midlands said: “We’ve had quite a few good chats about cheap clothing and not demonising it and the privilege of being able to clothe yourself adequately. … We’ve been talking about … the privilege of being able to make ethical clothing choices when you’re on a low income and … one of the dangers of it is that it becomes, like, a bit of- there's some snobbery in it’.

In a pre-workshop wardrobe audit in Cornwall, another participant said: “I don’t think it's about shaming people about what they buy, and going “and that's wrong”, I think it's more about helping people make more informed decisions.”

Dr Joanie Willett, from the University of Exeter, said: “We found the driving factor for avoiding fast fashion lies in realising clothing and the materials that it is made from are precious, and embody labour and time. After the workshops people expressed a desire to reduce their clothing either by buying fewer goods of better quality that they expected to be able to keep for longer or choosing not to buy anything at all for an extended time.”

Professor Clare Saunders, from the University of Exeter, said: “We found inviting people to immerse themselves in the materiality of clothing enabled potentially transformative affective encounters which like seeds, can be nurtured and fostered. The workshops supported participants to become more ‘fluent’ as people who create with textiles, and to find their enjoyment in undertaking these activities.”