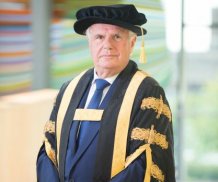 Lord Myners, former Chancellor of the University of Exeter who sadly passed away in January 2022, has been honoured with a new scholarship that will support talented students from his native Cornwall for the next three years.

The Lord Myners of Truro Scholarships will support an undergraduate student from a disadvantaged background, beginning their studies in each of September 2022, 2023 and 2024. Each student will be a top performer from our Widening Participation Pathways programme and the scholarship will be worth £12,000.

Lord Myners was a passionate believer in the power of education and at the heart of everything he did was a desire to help others. He was a proud Cornishman and a great supporter of the University who presided over the graduations of 20,000 students during his time as Chancellor until he retired in 2021.

Professor Lisa Roberts, Vice-Chancellor of the University of Exeter, paid tribute to Lord Myners, saying: “Paul was an exceptional Chancellor and a great friend of the University for many years, and he is hugely missed by all who knew him. These scholarships are a fitting way to honour his legacy at Exeter - supporting talented students from his beloved home county to benefit from a great education and Exeter experience.”

Paul’s children, Sarah, Charlotte, Lucy, Bartholomew and Talitha Myners, said: “We, the children of Lord Myners CBE, extend our heartfelt thanks to the University of Exeter for this generous and fitting tribute to our late father. Our father´s life was marked by many extraordinary achievements but, at the heart of all he did, was a true desire to help others and make a positive difference. He was a proud Cornishman and was passionate about doing all he could for his beloved county and his countrymen. Whilst there were myriad factors at play in our father´s meteoric rise from his humble beginnings, he always emphasised that it was the education that he had received that had truly opened his eyes to what was possible. He firmly believed that everyone should have the right to a good education. These core values are honoured in this scholarship and speak to the true legacy he leaves behind him.”

Having begun his working life as a teacher, Lord Myners went on to have a long career in business, finance, media and politics. He chaired household name companies including Marks & Spencer, the Guardian Media Group and Land Securities. He was Chairman of the Trustees of the Tate during a period of change in 2004 to 2008, and held other non-commercial appointments including Chairman of the Low Pay Commission, a Directorship of Singapore’s sovereign wealth fund and membership of the Court of the Bank of England.

He was appointed City Minister in Gordon Brown’s government in 2008, where he was instrumental in the UK government’s response to the financial crisis, and joined the House of Lords as Lord Myners of Truro, in the County of Cornwall. He was made a CBE in 2001 and in 2003 received an Honorary Doctorate in Laws from the University of Exeter.

Dr Shaun Curtis, Director of Global Advancement said, “For all of Paul’s distinguished achievements in business and politics, his first career was that of a teacher.  These scholarships reflect his lifelong interest in education and widening opportunity for young people.  We are delighted to pay tribute to him in this way.”

For more information on the scholarships, please visit the webpage.