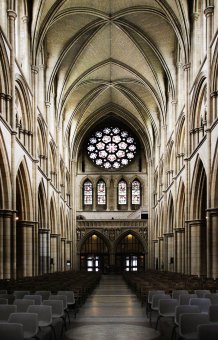 The class of 2020, 2021 and 2022 will all graduate as part of a bumper series of ceremonies at Truro Cathedral

Oceans advocate and skipper Emily Penn, journalist and equal pay campaigner Carrie Gracie and the Chief Constable of Devon and Cornwall Police Shaun Sawyer will be honoured by the University of Exeter at graduation ceremonies in Cornwall.

Next week the class of 2020, 2021 and 2022 will all graduate as part of a bumper series of ceremonies at Truro Cathedral before celebrating with Cornish pasties and a cream tea at the University of Exeter’s Cornwall campus.

A total of 2,570 people will graduate in ten ceremonies, watched by 3,002 guests. These are the first full-scale summer graduation ceremonies to be held since 2019 due to the coronavirus pandemic. The University of Exeter's new Chancellor, Sir Michael Barber, is presiding over the events for the first time.

Emily Penn is an oceans advocate and skipper who has spent over a decade exploring the causes of, and solutions to, plastic pollution from the tropics to the Arctic.

Ms Penn was a member of the crew of Earthrace, a record- breaking biofuelled boat. She co-founded Pangaea Explorations to enable scientists and filmmakers to gain access to the most remote parts of the planet via a 72ft sailing expedition vessel. She now runs the not-for-profit eXXpedition; a series of all- women voyages on a mission to help people understand the true ocean plastic and toxic pollution problem.

Ms Penn said: "I'm absolutely delighted to receive an Honorary Doctorate of Science from the University of Exeter for my scientific exploration and environmental research into the issue of plastic pollution. The University of Exeter is a real leader in furthering our understanding of this pressing global issue and I'm proud to be recognised alongside them."

Carrie Gracie won a Peabody and an Emmy as BBC China editor. She left her post in protest at unequal pay and eventually won her battle with the BBC, donating her back pay in its entirety to a charity supporting other women fighting unequal pay. In 2019 she published her first book Equal: How We Fix The Gender Pay Gap. She continued to campaign for gender fairness at the national broadcaster and to work as a news presenter and programme maker until late 2020 when she left the BBC to pursue new writing projects.

Ms Gracie said: “What an immense honour it is to receive an honorary doctorate from this great university! I'm particularly thrilled to share a ceremony with the cohort of students who resolutely stayed the course through hard Covid years. They deserve every congratulation and every celebration now that we can finally all be in the same physical space to deliver that tribute.”

Shaun Sawyer has served as Chief Constable of Devon and Cornwall Police since 2012.

He joined the Metropolitan Police Service in 1986; his formative years included policing public order events such as the poll tax riots and criminal justice disorders. He then worked in fighting serious and organised crime, counter-terrorism and combatting police corruption. He was the lead commander for combatting gang violence within London.

Since 2013 he has been the National Police Chief Lead for preventing Modern Slavery and Human Trafficking, working with academics including those from the University of Exeter.

Mr Sawyer said: “To receive this recognition from the University of Exeter is a particular honour and privilege. The role of the University within the local community and the wider peninsula has increased throughout my 10 years as Chief Constable and its regard and influence internationally, is especially deserved. The work of the University and its Alumni is a positive influence for good in a world where the wisdom and independence of academic reporting is as vital in the development of humankind as it has ever been.”