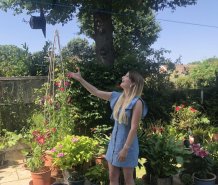 Graduates at the University of Exeter celebrated finishing their degrees in an online ceremony to mark their achievements - with some wearing home-made mortar boards and gowns.

The conferment video was posted to the platform Flipgrid to students internationally with the Vice Chancellor Sir Steve Smith, the Chancellor Lord Myners of Truro and celebrity and prominent alumni congratulate the new graduates.

Students, staff and supporters were invited to upload their own celebratory video messages to the platform. Over 600 videos were uploaded with over 14,000 views in total. Notable alumnus Steve Backshall and supporters of the University, including Charles Dance, Actor and director, and Don Boyd, Scottish film director, offered messages of support and advice to the graduates.

Steve Backshall said to students: “I’m also set to graduate this year from the University of Exeter with an MSc in Bioscience and I know how much work that has taken and I can totally understand your frustration and disappointment at not being able to celebrate the way that you would like […] the disappointment will pass, that’s transitory, but the kudos of graduating from a University like Exeter will last for the rest of your life. So congratulations, and all the very best.”

The ceremony thanked all students for their hard work and support during the pandemic, sharing inspirational stories of student’s volunteering and stepping up in their community. The online conferment included Medical and Medical Imaging students who chose to graduate earlier in May from the University of Exeter Medical School to support the NHS during the pandemic.

Laura Pusey, BSc Medical Sciences with professional year, said: “It was lovely to attend the online celebration to mark the end of my degree, albeit in completely unexpected circumstances. After several months of uncertainty and rushed goodbyes to university life, it’s been really lovely to feel like everyone has (virtually) come together again to celebrate. I especially enjoyed being able to hear from my lecturers by watching videos they had sent in – it made it feel even more special.”

Joey Higham, BSc Politics and Middle Eastern Studies, said: “I don’t think anyone could have imagined that we would be finishing our degrees from kitchen tables, bedrooms and living rooms across the country, but in very stereotypical student fashion, I feel that everyone has made the best out of a complicated situation and that was embodied in the online conferment today. Whatever has happened in the past few months with the varying difficulties, ups, downs and a pandemic, nothing can take away from the fact that I’ve had the best three years of my life at Exeter and now more than ever, that’s what I will always be thankful for!”

Jane Chafer, Director of Marketing, Recruitment, Communications and Global, said: “It was a logistical operation to get the celebrations online, but we had experience with online celebrations from our early medical graduates. The hard work was all worth it to see the students able to celebrate with their fellow classmates and mark their day.”

Sir Steve Smith, Vice Chancellor and Chief Executive of the University of Exeter, said: “We simply could not let this moment pass without marking such an important milestone in our students’ lives, as well as creating a chance for graduates to celebrate with those who have supported them. I’m incredibly proud and delighted that we were able to join together online to officially confer degrees upon those who were graduating.

“Our students make an enormous contribution to our University, to this region and to their own communities and I want to thank them for making a difference.”

The music in the ceremony was performed by the University of Exeter Chapel Choir and Graduation Brass.