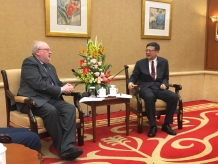 The University of Exeter has been showcasing collaborations in Hong Kong and Beijing in recent weeks. Hong Kong’s equivalent of the Met Office  - the Hong Kong Observatory – was host to more than 100 Hongkongers at a Global Conversation event, which considered the question: “Can big data save lives?”.  The Director of the Hong Kong Observatory introduced speakers from The Chinese University of Hong Kong, HKUST, Willis Towers Watson and Exeter’s own Prof Gavin Shaddick.

In Beijing, four of the University of Exeter’s ‘Turing Fellows’ met with the Director of the Beijing Academy of Artificial Intelligence (AI). DVC for External Engagement Prof Mark Goodwin led the Exeter delegation; the first to visit the new AI Academy, which launched in November 2018. The Academy pledged to host Exeter students for internships.

There were also meetings with student recruitment agents, with Peking University and with Tsinghua University. At Tsinghua, Exeter’s Vice Chancellor launched the China-UK Humanities Young Talent Alliance alongside the Chancellor of Tsinghua University. Sir Steve was hosted at a meeting by the Mayor of Beijing (pictured), at which they discussed how Exeter’s research can work with Beijing on climate change policy, area studies and artificial intelligence.