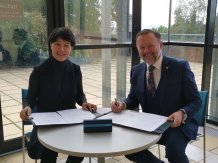 Tsinghua University’s Institute for International and Area Studies (IIAS) has signed a new agreement with the University of Exeter, which will see the two universities appoint a joint chair in Area Studies.

Based at Exeter’s Institute of Arab and Islamic Studies, the Exeter and Tsinghua Professor of Area Studies will be an expert in the anthropology, history, social sciences and cultures of the Middle East. Though based in Exeter, the post holder will spend three to five months of each year working at Tsinghua’s IIAS and will play a key role in developing new research opportunities between Exeter and Tsinghua.

Tsinghua University has earned a reputation as one of the finest academic institutions in the world, currently ranked 1st in the 2019 Times Higher Education Asia University Rankings.[1] The agreement is the latest in a long series of collaborations between Exeter and Tsinghua, which have seen an increasing focus on Area Studies emerge in recent years. Professor Andrew Massey and Professor Shi Zongkai signed a Memorandum of Understanding between the College of Social Sciences and International Studies and IIAS on April 5th 2018, which set out a framework for developing new activities in this field.

The appointment of a joint chair represents an important step in developing further research and teaching collaborations. On 6th November, Professor Gareth Stansfield, Director of the Institute for Arab and Islamic Studies (IAIS), and Madame Zhang Jing, Associate Director of the Institute for International and Area Studies (IIAS), signed a new collaboration agreement to jointly fund the new joint chair post. The position will be advertised shortly and will join Exeter’s IAIS in 2020.

Tsinghua and Exeter are amongst the top institutions for the study of Area Studies in their respective countries. REF 2014 saw IAIS placed as the highest ranked Middle East and Islamic Studies department in the UK, whilst the Institute is also well known for delivering a wide range of taught and research degree programmes focused on the Arab world.[2]

Tsinghua’s IIAS is an independent research institute of Tsinghua University established on September 20th, 2017. The IIAS has since taken steps to assemble an impressive array of researchers to both deliver outstanding academic research and to train the next generation of scholars in Area Studies. IIAS mission statement ‘encourages researchers to conduct foundational and significant country-specific or region-specific research from the perspective of political science, economics, sociology, public administration, history, or law, or from an interdisciplinary angle.’[3] In this regard, their academic priorities align particularly well with those of the Institute of Arab and Islamic Studies. Both parties believe that much can be gained from combining Chinese and UK expertise in tackling significant research questions related to the Middle East and beyond.

Professor Wendy Robinson, Pro Vice Chancellor for the College of Social Sciences and International Studies, said of the agreement ‘I’m delighted to enter into this new phase of our relationship with Tsinghua’s Institute for International and Area Studies. Exeter is rightly considered to be a world-leading institution for the study of the Middle East and Central Asia. To join forces with the Institute for International and Area Studies at China’s premier University creates numerous new possibilities for both institutions. Our joint chair will not only be a leading academic in the field, but will also play an invaluable role in opening up new frontiers for joint research and teaching between the UK and China.’

[2] Research Excellence Framework 2014 based on the percentage of research categorised as 4*. Arab and Islamic Studies is returned to the Area Studies Unit of Assessment