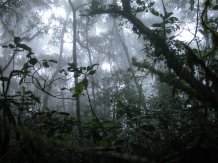 Today, rainforest covers much of Central Africa, but scarce fossil records suggest ice ages may have caused the forest to shrink and fragment, giving way to savannahs.

The new study found clues to support this, by identifying genetic signs of points when two populations of the same species emerged from one ancestral population – probably caused by the forest fragmenting into separate sections.

It is believed that repeated ice ages over the last few million years made Central Africa cooler and drier, while areas further from the Equator froze.

"We examined the DNA of five legume trees, which are found widely in African rainforests," said Dr Rosalía Piñeiro, of the University of Exeter.

"We identified significant genetic traces of fragmentation – physical splits between populations – at dates that suggest the forest retreated during cool, arid periods caused by ice ages."

Unsurprisingly, the rate at which species recolonised areas after ice ages seems to have been slower in trees with short-distance mechanisms of seed and pollen dispersal.

"With the climate and land use now changing rapidly due to human activities, these trees are unlikely to respond and recolonise efficiently," Dr Piñeiro said.

"Tropical areas are often overlooked in ice-age research, and Africa and the tropics are both under-studied in general.

"Despite their long history, our results show that African rainforests are a dynamic biome where the range occupied by tree species has changed due to constraints imposed by climate changes."

The paper, published in the journal Proceedings of the National Academy of Sciences, is entitled: "Contrasting genetic signal of recolonization after rainforest fragmentation in African trees with different dispersal abilities."