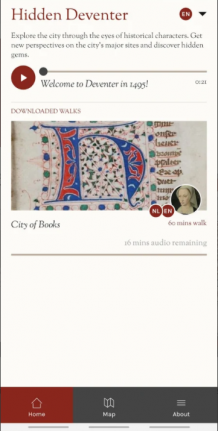 The Hidden Cities app, and accompanying website, allows people to navigate through the city on geo-located period and modern maps, exploring key landmarks, either with GPS while walking through the cities or elsewhere.

People can step back in time to Renaissance Italy or Elizabethan England as part of a new app which allows people to take exciting tours of some of Europe’s most historic cities from their own homes.

The technology provides a new way of exploring the past – and present – in Deventer (Holland), Exeter (UK), Hamburg (Germany), Trento (Italy) and Valencia (Spain), with historical guide characters from the 15th to 17th centuries.

The Hidden Cities app, and accompanying website, allows people to navigate through the city on geo-located period and modern maps, exploring key landmarks, either with GPS while walking through the cities or elsewhere. They give fascinating information about the lives and times of ordinary men and women linked to places in the cities, such as the artisan uprising in Valencia of 1519 to 1521, and immigration in Trento in 1520. Users will get a fresh perspective on well-known sites, and discover places off the beaten track.

People can listen in English or local languages to stories about the cities, chosen because they are sometimes overlooked as tourist sites. The technology shows how the past can be seen in the public spaces still enjoyed by the public today

The app, produced by an international team of leading historians and voiced by professional actors, is free to download on Apple and Android devices. The experts worked closely with local museums and libraries, including the RAMM in Exeter, to pick objects from the cities which are showcased on the app and website.

In Deventer the guide is Katharina, speaking from 1495. In Trento it is Ursula, an innkeeper from 1520, in Exeter it is Thomas, a local city councillor speaking from 1588. The characters link each site to stories of early modern city life, about book stalls, street shrines, spiritual sanctuaries, taverns and places of execution.

Users can also listen to audio from historians, who give information about objects, such as drinking tankards, armour or cheap pamphlets, that were once associated with that place. Many of these objects can be visited in city museums.

Project lead Professor Fabrizio Nevola, from the University of Exeter, said: “The Hidden Cities apps harness the everyday consumer technology of smartphone devices to deliver innovative public history experiences that invite users to delve into the deep histories of public space and its uses in the European cities we inhabit today.

“People can listen to stories which connect public spaces with the material culture of those spaces in an engaging yet playful way. The supporting website provides rich additional information and encourages users to explore comparisons across the cities.”

In future more character-led walks will be developed for the five cities, and more cities around the world will be added to the app. It is also hoped the app can be an educational tool, allowing students to tackle issues and themes in urban history by creating their own walks in the cities of the past.

The app is a result of a three-year collaborative research project “Public Renaissance: Urban Cultures of Public Space between Early Modern Europe and the Present”s, funded by the Humanities in the European Research Area (HERA). They are written by historians based at the universities of Exeter; Groningen; the Fondazione Bruno Kessler (Italian-German Historical Institute); Universidad Católica de Valencia; Universitat de València; and Friedrich-Alexander-Universität Erlangen-Nürnberg.