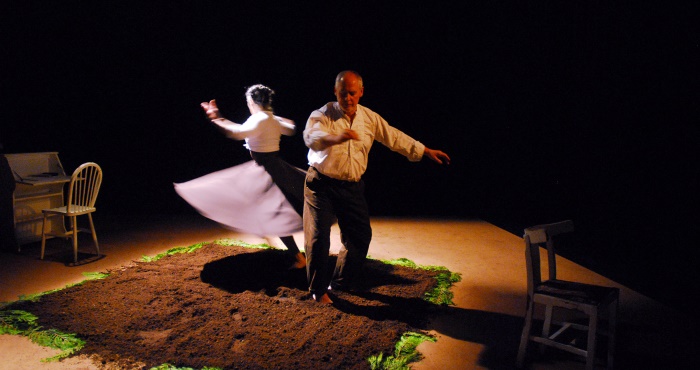 Performers Jo Shapland and Philip Zarrilli in 'Told by the Wind'.

Creating innovative and fit-for-purpose methods of documenting and archiving of performance training, process, and practice is central to sustaining and developing the University of Exeter’s Drama research.

Researchers in the University of Exeter’s Centre for Contemporary Performance Practices investigate, through practice and theoretical reflection, the mechanisms of cultural exchange in performance. They also investigate the principles and practices of actor training, particularly the investigation of culturally diverse methods of training.

Their work includes experimentation with and reflection on the effects and results of this intercultural exchange. This interdisciplinary and intercultural research informs performance training, practice and processes. Researchers also develop and model creative methods for documenting and archiving practice-based research within the subject area.

Dr Loukes co-created and performed in the award-winning, critically acclaimed production The Idiot Colony with her company, RedCape Theatre, which entertained audiences at 92 public performances at significant UK venues. The project focuses on the combination of professional training approaches from Gindler work and Asian martial-meditation arts, offered by Dr Loukes, with the methodologies taught by other company members.

RedCape were one of only two UK companies to be selected to perform at the Institute of Contemporary Arts as part of London International Mime Festival. In 2012, the success of this led to further Arts Council England (ACE) funding for 1, Beach Road, with Dr  Loukes as Dramaturg, touring nationally. RedCape have taught their techniques in schools and universities around the country, have recently published The Idiot Colony script and are developing an innovative Teachers’ Resource Pack for use within the A-level and GCSE curriculum. They are now working on their third major ACE funded project on the theme of bravery which will premiere and tour the UK in 2015.

Informing intercultural performer training worldwide, Professor Zarrilli's psychophysical actor training process has achieved global impact on performers and training programmes through his award-winning publications and international workshops and professional directing/acting work. He has delivered more than twenty-five invited workshops/long-term residencies worldwide since 2008 and was a Resident Fellow at Freie Universitat Berlin's Research Institute, 2010-2013. His book Psychophysical Acting also won the Association for Theatre in Higher Education (USA) Outstanding Book Award in 2010; the book is accompanied by a DVD by Peter Hulton, and is an example of the work he undertakes with Exeter Digital Archives in enhancing the impact of the department’s research. The book was translated into Chinese in 2014.