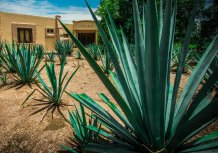 The paper ‘Agave: a promising feedstock for biofuels in the water-energy-food-environment (WEFE) nexus’ is published in the Journal of Cleaner Production