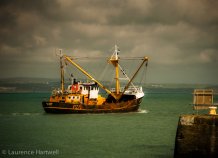 Fishers at risk in 'perfect storm'

Stormier weather will increasingly force fishers to choose between their safety and income, researchers say.

Climate change is causing more extreme weather in many locations. Storms will likely increase around the UK in the future, while many fishers in the UK also face economic insecurity.

The new study – led by the University of Exeter – worked with fishers in Cornwall to understand how they balance the risks and rewards of fishing in varying conditions.

Factors that made skippers more likely to risk fishing in high wind or waves included: being the main earner in their household, poor recent fishing success, and having a crew to support.

"Fishing is already the most dangerous peacetime profession in the UK, and the combination of more extreme weather and financial challenges will only make this worse.

"Solving this problem is difficult.

"Our suggestions include policies that improve the safety of boats and support less vulnerable fishing methods, and the creation of insurance products that pay fishers to stay in port in dangerous conditions."

The research team included scientists from the Centre for Environment, Fisheries and Aquaculture Science (Cefas) and the universities of East Anglia, Bristol and North Carolina Wilmington.

Researchers presented skippers with various scenarios with differing factors including wave height, wind speed, likely catch and price – and asked them which trip they would prefer, or whether they would stay ashore.

“Skippers working with a crew were more likely to ‘push the weather’", Dr Sainsbury said.

"This could partly be explained by the fact it's safer to fish with a crew than alone, but might also be because skippers feel responsible for providing incomes for their crew – even if the conditions are risky."

Fishers were asked to score their fishing success over the previous month on a scale of one to five – and catch levels were more important to those with low scores, which would lead them to take greater risks if they expected a good catch.

Boat size and fishing method also affected decision making. Unsurprisingly, skippers of larger boats and those whose method was less risky in high winds or waves were more willing to go out in such conditions.

"We have shown that fishers’ trade-offs of physical risk and fishing rewards are influenced by technical, social and economic factors.

"This study provides insights that could be very helpful in trying to predict levels of disruption to the fishing industry in the future as a result of changing storminess and climate change.”