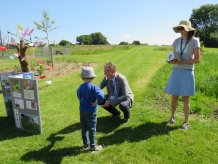 The University of Exeter and Cornwall Council recently ran a successful photography competition encouraging people in Cornwall to get out and explore their local green spaces in villages and towns by photographing urban nature within walking distance from their house.

The competition was run as part of the Making Space for Nature Project (Green Infrastructure for Growth 2, part funded by the European Regional Development Fund). The project aims to bring more wildlife to the ‘green deserts’ of small, urban public spaces across Cornwall.

An event was held at Castle Park in Liskeard on Friday to celebrate the Making Space for Nature project, opened by the Mayor of Liskeard Simon Cassidy. Two of the winners of the photo competition attended the event and were presented with their prize and certificate by Councillor Alvey. The youngest entrant, 6 year old Cadan, was recognised for his picture of a bumblebee and Katie, aged 15, was rewarded for the composition of her photo of meadows.

The winner for the Urban Wildlife category was Craig Macey with his picture of a common lizard and Mark Broadhurst was the runner up for his picture of fox cubs on the edge of a housing estate.

The People and Parks category had some wonderful entries showing the wide range of use of Cornwall’s public spaces. Nicole Forrester’s winning photograph of people using a skate park was a great action shot. The runner up, Anna Druce, submitted a tranquil shot of an inviting park with tree blossoms.