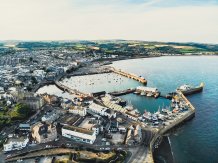 Giving Living Wage Town status to Penzance would help improve the local economy and the reputation of the area, new research shows.

A study shows support for the move among people living and working in Penzance and local employers.

Experts have found low pay is a major concern for people working in Penzance and the prevalence of low pay may be increasing. People are worried about meeting living costs that are rising faster than wages

The report says people paid below the Real Living Wage are not a specific group, but spread across age, circumstances and employment type

Promoted by the Living Wage Foundation, the Real Living Wage (RLW) of £9.90 aims to better reflect the cost of living than the government-set National Living Wage, which sets a statutory minimum level of pay at £9.50. The foundation is supporting the concept of Living Wage Towns and Living Wage Places, to recognise areas where employers and the community are committed to adopting the higher rate of pay.

Currently, only one town in the UK – Glenrothes in Scotland – is accredited a Living Wage Town. As a result, there is a lack of research into the potential impact of the viability of the schemes in rural areas, which may be largely dependent on one or two industries such as tourism.

Penzance BID commissioned the report with funding support from Cornwall Council and Cornwall and Isles of Scilly Local Enterprise Partnership (LEP). The research team, from the University of Exeter’s Environment and Sustainability Institute (ESI), based at the Penryn campus in Cornwall, undertook a survey of residents and interviewed employers.

The study shows many employers feel a social and moral obligation to support the Real Living Wage, but some perceive it to be unaffordable. Other factors governing employment – such as seasonal jobs, lack of guaranteed hours, and housing, are also a major concern.

Professor Jane Wills, director of the ESI and co-author of the report, said: “Raising wages would have a significant impact. The Real Living Wage is designed to “make work pay” and allow more money to circulate in the local economy, supporting businesses as well as workers. It is needed now more than ever.”

Dr Claire Collins, lead researcher and also from the ESI, said: “Although the Real Living Wage is now only 50p an hour above the statutory National Living Wage, raising wages would have a significant impact on quality of life, feelings of worth and wellbeing for the local community.”

Louis Gardner, Cornwall Council cabinet portfolio holder for economy, said: “There is a clear interest amongst both employers and employees in Penzance in becoming a Living Wage Town, which has the potential to make a significant impact given the low rates of pay across Cornwall and the Isles of Scilly. Penzance is leading the way to explore opportunities and the leadership shown by local employers, the BID and councillors is an example for others to follow.”

Moving forwards, an action group is being formed with the aim of encouraging others to sign up to paying the RLW. It includes businesses already accredited as paying the RLW, as well as local workers and civic leaders. The goal is to put Penzance on the national map as a fully accredited Living Wage Town.

The report can be found at: https://penzancebid.co.uk/real-living-wage/