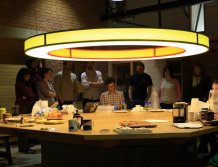 The ESI recently hosted a day featuring two events devoted to the subject of biohacking.

Ilya Levantis and Nick Fitzroy-Dale, who run the London Biohackspace, talked about the fast-growing movement to a packed audience during the day and, later, led a workshop in Penryn which allowed interested individuals to try their hand at biohacking.

Hacklabs (also known as hackspaces or makerspaces) are community-run spaces for knowledge-sharing and making. They have been growing in popularity globally, and more recently biohackspaces – community biology labs –  have also started to gain momentum.

The movement’s growth will be familiar to those old enough to remember what happened to the music industry in the late 1970s: a DIY spirit of independence, frustration with the status quo, increasingly easy access to both equipment (for example, via 3D printing) and to low-cost, non-profit, open access publishing models. All of which, when combined with the power of social media and the potential for crowdfunding, gives rise to the possibility of a different kind of science: faster, more flexible, more local and community-driven than the kind of research which has previously been the norm.

Those attending the later event in Penryn tried their hand at Yeastograms, which involves combining photography with biology to make living images from yeast cells; have a look at a collection of images from the evening.

The event – which was arranged by Dr Amber Griffiths – was a collaboration between the London Biohackspace, FoAM Kernow and the ESI, and funded by the University’s Creative Exchange Programme and FoAM Kernow.

Last year, Dr Griffiths wrote a piece for the Guardian Online about the biohacking movement.