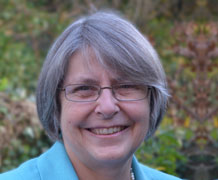 Jean Taylor worked for the University for 21 years before she retired from her role as Head of Strategic Economic Development in Cornwall last summer.

A key figure in establishing and building the University of Exeter’s Cornwall campuses has been awarded an MBE for services to the community.

Jean Taylor worked for the University for 21 years before she retired from her role as Head of Strategic Economic Development in Cornwall last summer. She was integral to cultivating and nurturing relationships with businesses in the county - a key aspect of securing the European funding needed to kick-start the Penryn Campus. She also helped support colleagues who developed the Truro Campus, where the University of Exeter Medical School has a base.

Jean, who was born in South Africa and lives in Devoran, near Truro, said she was “surprised and shocked” to receive the honour, and hoped it gave recognition to the wider value of the Cornwall campuses to the region’s businesses and communities.

Jean, 65, said: “It has been an unbelievable privilege to be involved in the Cornwall campuses from their inception through to delivery. The rate of change has been phenomenal, and I feel incredibly lucky to have been part of the wide range of people who have helped create that legacy. It’s fantastic to know that young people are benefitting, both now and into future generations.”

Jean has a degree in Geology and began working with the University’s Camborne School of Mines in 1994, where she specialised in building up its portfolio of short courses for professionals. The role involved cultivating relationships with businesses to understand their training needs, forming the beginnings of a network which would grow over the years, as she worked with partners Falmouth University, which was then University College Falmouth, Plymouth University, The Cornwall College Group and Truro and Penwith College. Together, they formed the Combined Universities in Cornwall, which bid for European money under Objective 1 and Convergence funding, designed to boost businesses and communities in the county. Success was dependent on demonstrating tangible benefits to businesses, and Jean’s contacts and knowledge helped bring together academics with small and micro businesses to explore growth potential. This expertise helped win bids to establish both the Truro Campus and the Penryn Campus, which the University of Exeter shares with Falmouth University.

Last year, an economic impact study led by analysts Oxford Economics concluded that universities in Cornwall brought in £490 million to the county and the Isles of Scilly between 2002 and 2012.

Jean was involved in commissioning the report and is proud of the finding, and added: “We think that campuses helped reverse the damaging trend of young people leaving Cornwall to find education or work. A decade ago, there was a net loss of young people leaving the county, but within five years of the Cornwall campuses launching, this turned into a net gain. I think it’s bringing people back, and there’s also the benefits of a vibrant academic community in the area. This boosts a wide range of activities, ranging from arts and culture to conservation and ecology and marine renewable energy.”

The University of Exeter began its operations on the Penryn Campus in 2004, and these have developed rapidly over the last decade. In 2014, the University opened the £30 million Environment and Sustainability Institute, an interdisciplinary research centre leading cutting-edge research into solutions to problems of environmental change, and an event Jean views as a career highlight after years of planning and negotiating brought it to fruition.

In retirement, Jean remains active – including continuing on the board of the Padstow-based National Lobster Hatchery, one of the many businesses to have developed mutually beneficial relationships with the University. Research includes studies which aim to boost survival rates of lobsters in the marine environment.

Professor Sir Steve Smith, Vice-Chancellor of the University of Exeter, said: “I’m delighted that Jean’s passion, dedication and hard work have been deservedly recognised by this prestigious honour. Her role in developing our Cornwall campuses was an integral part of an ambitious development that has boosted the economy and means young people in the county now have access to world-class education on their doorstep.”