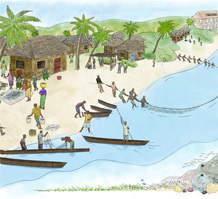 Most primary stakeholders are poor and tradeoffs that affect their wellbeing can often be overlooked.

Ecosystem management that ignores ‘taboo tradeoffs’ is likely to fail

New research recommends a fresh approach to the difficult tradeoffs that environmental managers face when choosing between environmental sustainability and profitability.

The findings could help to protect marginalised people and improve conservation success.

The study, published in the Proceedings of the National Academy of Sciences, focuses on the case of coral reef fisheries and shows that conservationists and resource managers usually focus on ‘win-wins’, such as the gains in profitability and conservation that can be won by reducing overfishing. But tradeoffs with wellbeing, especially of the poor, are sometimes overlooked. These ‘taboo tradeoffs’, such as the impact on the livelihoods of poor women who earn a living as fish traders, are tricky to incorporate into decision-making and resource planning.

Professor Katrina Brown from the Environment and Sustainability Institute at the University of Exeter’s Penryn Campus in Cornwall said: “Our study demonstrates the need for a new approach that explicitly recognises the different values and hidden tradeoffs involved in decision-making for conservation and resource management. New conservation rules can only feasibly be devised and regulations implemented when local people are confident of fair processes that recognise their voices, views and needs.”

Tradeoffs can be considered as ‘taboo’ or as ‘tragic’ when they pit deeply held societal values or moral judgements against more straight-forward aspects such as profit or productivity. A common dilemma faced by health planners pits human lives against investment choices. Imagine, for example, the dilemma facing a doctor who must choose which of two children most needs a liver transplant. Society does not judge people for agonising over these ‘tragic tradeoffs’ between two sacred values.

However, a tradeoff between saving a child or the hospital earning money from cosmetic surgery will quickly draw fire and is an example of a ‘taboo tradeoff’ between something sacred, and something secular. Some people are repulsed by someone even considering this kind of tradeoff.

These ideas have been used to understand tension and conflicts in politics, such as those around freedom of choice versus national security.

In this study a team of researchers, from Kenya, the UK, Sweden and Canada, adopted this concept and applied it to sustainable fishing decisions faced by managers and communities in coastal Kenya.

The researchers analysed the various trade-offs involved when fisheries managers have to make decisions about the sustainability of the fishery.

The groups of people affected included captains of illegal, but widely used large beach-seine nets; labourers employed in teams to pull the nets; independent fishers using other gears, such as small gill nets and spears; male traders, who specialise in large fish for high value markets; and female traders, who buy smaller and cheaper fish, typical of beach seine catches, and fry them to sell to local communities.

The results revealed an important ‘taboo tradeoff’. Women who rely on the cheap fish produced by heavy fishing pressure would lose out if conservation measures were imposed that required the fishery to produce larger, more valuable fish. Although the measures would improve fishery profits, the uncomfortable truths about social winners and losers were being ignored by decision makers.

To confront such uncomfortable truths and ensure that decisions take into account the whole community, the researchers devised a forum in which managers and researchers and others in the community could discuss a range of trade-offs that are usually ignored and are invisible to conventional economic or scientific analysis.

One conservationist said the forum broadened their perception of the ecosystem and links to wellbeing: “Now, I do not approach projects from a narrow perspective. Previously I might have shied away from a gender meeting, but now I am willing to attend, because I realise that there are interconnections to the work that I do in conservation.”

Lead author Tim Daw from the Stockholm Resilience Centre said, “The impact of the fishery on marginalised women was not considered as part of the management decision making. It is often the case that environmental analysis focuses purely on economic tradeoffs or even avoids these in favour of win-wins. Our participatory approach has the potential to increase awareness of taboo tradeoffs.”

Co-author Johnstone Omukoto from the Kenya Marine and Fisheries Research Institute (KMFRI) explained, “When we modelled this system we found that maximising for one objective such as ecology causes a change in others that may be harmful for some stakeholders, such as employment. There is no ‘win-win’ situation.”

The researchers carried out their analysis on a small-scale fishery at Nyali, Mombasa, Kenya, where most of those who benefit from the fishery are poor. Similar fisheries provide a livelihood to about 100 million people across the developing world.

The approach, applied in this study to a small Kenyan fishery, could be adapted to help address the difficult tradeoffs which so challenge sustainable ecosystem management in poor as well as wealthier countries across the world.

This research was supported by the UK Government through the Ecosystem Services for Poverty Alleviation (ESPA) research programme.