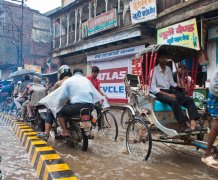 The quest to discover how future climate change will impact the formidable Indian monsoon phenomenon could find the answer rooted in the prehistoric past.

A team of international scientists, including Dr Kate Littler from the University of Exeter, are investigating how the annual monsoon has responded to cyclical changes in Earth’s climate over the last 8 million years.

By studying layers of sediment that have collected at the bottom of the northern Indian Ocean, the Bay of Bengal and the Andaman Sea, the team are able to ascertain how the Indian monsoon developed in the deep past and specifically how it behaved during past periods of global warmth.

Crucially, the scientists hope to be able to use the data to predict how the monsoon may respond to future climate change, and so determine the impact it may have for the billion people around the Indian sub-continent who are currently affected by the extreme rainfall it brings.

Dr Littler, a palaeoclimate specialist from the Deep Time Global Change research group based at the Camborne School of Mines, as well as an academic affiliate at the Environment and Sustainability Institute (ESI), was one of two British-based scientists taking part on the expedition, supported with funding from the UK International Ocean Discovery Program (IODP). Along with 120 shipmates, Dr Littler spent two months on the JOIDES Resolution, the IODP’s scientific drill ship, recovering marine sediment from this poorly studied part of the deep-sea.

She said: “Sailing as a sedimentologist aboard the ship has been a fantastic opportunity to work collaboratively with an international team on these important geoscience questions. By analysing these hard-to-reach deep-sea sediments we will make important discoveries about the behaviour of the Indian monsoon in the deep past, and how its behaviour and intensity may change in the near future.”

Using advanced deep-sea drilling techniques the team were able to take sediment samples made up of a mixture of clay, washed down from the Indian sub-continent, and ancient marine microfossils, which sank to the bottom of the sea when they died. These muddy sediments form thick layers at the bottom of the sea, which harden and become solid over time under the immense pressure of their own weight.

Once recovered from the ocean depths, these layers can be analysed to reconstruct what regional and global climate was like during the period the microfossils lived. By looking at how the monsoon behaved in the past, in terms of the intensity and seasonality of rainfall and the temperature and salinity of the ocean, the scientists are hoping to gain a greater understanding of the challenges that may be faced in the future as climate change occurs.

Collecting the samples from the deep sea is only the first step of the process; now the difficult task of carrying out the complex geochemical and sedimentological analysis of the sediments begins. The first preliminary results are expected to be available by the end of 2015, although the work will be ongoing for years to come.

Dr Littler said: “It was an incredible experience. We recovered sediments from six sites in total, including an area of the Bay of Bengal that has never been scientifically drilled before. We have also recovered numerous volcanic ashes from within the sediment cores, which can be correlated to specific ancient volcanic eruptions that can help up to correlate between the different cores and provide an accurate age for the sediment.

“Having a multi-national and multi-disciplinary team means we can look at these issues from many different angles. Some of us will be analysing organic biomarkers left by organisms that can tell us about ancient sea surface temperatures and past rainfall intensity, while others are examining the sediment itself for clues about past oceanic processes. The data will give us a holistic idea of the past behaviour of the monsoon.”

The Indian summer monsoon provides about 80 per cent of annual rainfall to around a billion people in South Asia, Variations in its timing, intensity and duration have a dramatic impact on societies, in areas such as farming or managing its increasingly pressured water resources.