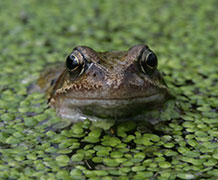 Fish may amplify viral levels in the environment or cause stress hormone production that reduces immune function in wild frogs. Image courtesy of Shutterstock.

Pond owners are being urged not to use garden chemicals, or to release goldfish into ponds, because of the risk they could pose to wild frogs.

Researchers from the University of Exeter found that the severity of ranavirosis, a devastating disease that kills thousands of frogs each year, increases in the presence of exotic fish. The use of garden chemicals was also associated with increased severity of the disease.

The study, which is published in the journal PLOS ONE, highlights the risks of releasing fish into garden ponds.  Fish may amplify viral levels in the environment or cause stress hormone production that reduces immune function in wild frogs.

Lead author Alexandra North from the Environment and Sustainability Institute at the University of Exeter’s Penryn Campus in Cornwall said: “Our results show that we can all help limit the impact of this devastating disease. It is important to reduce the use of garden chemicals like slug pellets and weed killers, which weaken the immune systems of frogs, and to stop stocking ponds with non-native species like goldfish. Crucially, people should not move fish, frog spawn, pond weeds or ornaments from one pond to another as this could spread the disease.”

The researchers analysed a long term dataset of mortalities in the common frog from across Britain to identify which characteristics were associated with ranavirosis. Since 1992, UK pond owners have reported common frog mass mortality events to the charity Froglife which administers the dataset.

Ranavirus causes systemic haemorrhaging and severe skin ulcers in amphibians which can result in a loss of limbs, and often death. It is thought to have entered the UK via the pet trade and has contributed to the global decline in amphibians.

Dr Amber Griffiths from the Environment and Sustainability Institute at the University of Exeter’s Penryn Campus in Cornwall said: “We are currently undergoing a mass extinction of species, and amphibians are particularly under threat. The unprecedented loss of amphibians indicates widespread environmental degradation. The interactions between disease and climate change are deadly. The deeper problem is climate change, but our study shows that people can make an immediate difference by changing their habits in their own gardens”.

The study highlights links between disease severity, pond characteristics and garden practices which demonstrate the potential for garden owners to take simple precautions that will help to reduce ranavirosis incidence and severity in the wild across Britain.