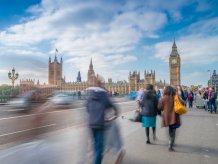 Having a say in the national conversation

The ESI’s Dr Joanie Willett was one of two academics who recently gave evidence on behalf of The Political Studies Association (PSA) to Parliament’s Constitution Committee consultation on the State of the Union and Devolution.

Dr Willett, with her colleague Dr Arianna Giovannini, represented the views of the PSA, which is the UK’s leading organisation linking academics in political science and current affairs, theorists and practitioners, policy-makers, journalists, researchers and students in higher education.

At the heart of the current process is the concern expressed by Parliament’s Constitution Committee that devolution has failed to take into account the needs of the UK as a whole. This inquiry therefore focuses on the Union: considering both what binds the UK’s constituent parts together and how the Union can be strengthened and reinforced. The inquiry’s two key themes have been, firstly, which principles should underlie the existence and governance of the Union and the exercise of power, both centrally and by the devolved nations? And secondly, how can the Union be stabilised and strengthened in line with those underlying principles?

Joanie and her colleague gave detailed responses on behalf of the PSA to specific questions regarding the devolution settlement’s current asymmetry, the effect of devolved taxation and welfare powers on economic and social union, and on how undue emphasis on the north-south divide overlooks starker contrasts between the wealth of the south-east compared with the relative poverty of, Cornwall and the Isles of Scilly, West Wales and the Valleys.

Dr Willett said: “This is a time of radical opportunity to shape how we would like government to be run. There are conversations happening, at a local and national level, exploring what kind of relationship we would like to have with the state, and in Cornwall, with a long-standing campaign for political decentralisation (and indeed, we also have the devolution deal), we are ideally placed to be at the forefront of it.”

She continued: “The evidence we gave is, effectively, part of a broader national conversation. A less formal but equally valid part of that conversation will be our #OnTheThrone campaign, which will invite the views of people nationally on how we might better be ruled and what our priorities should be. Parliament’s Constitution Committee will be treating those collected views as part of this same process.”

The PSA’s written evidence is available here, while here are full details of all written submissions to the Committee so far.