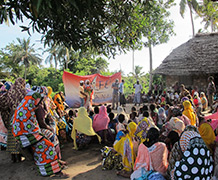 The Kenyan actors will work alongside Cornwall-based GoldenTree Productions, and researchers from the ESI, in a unique event, Weather the Storm, in Porthleven.

Researchers at the University of Exeter’s Penryn Campus will today welcome actors from Kenyan charity, S.A.F.E. Kenya, as part of a project to investigate how coastal communities deal with the sometimes devastating effects of extreme weather.

The project will draw on experiences from the storms of winter 2013 – 14 when the fishing village of Porthleven in Cornwall was battered by huge waves. The Kenyan and Cornish groups will discuss how communities cope with extreme weather events, how this can inform government policies and how best government can support communities.

Professor Katrina Brown from University of Exeter’s Environment and Sustainability Institute (ESI), who leads the project which is supported by AXA Research Fund said: “Communities around the world are likely to experience more extreme weather in the future. We need to use all means to build resilience and to engage communities, decision-makers and planners, and other citizen, business, scientific and creative groups to identify how to do this. The experiences of coastal communities around the world – from Cornwall to Kenya – have to inform this process and shape change.”

British actor Nick Reding, known for his roles in The Bill, Silent Witness and the Constant Gardener, founded the theatre company S.A.F.E. Kenya, and will accompany the actors during their week-long visit to Cornwall (23 September – 5 October).

The Kenyan actors will work alongside Cornwall-based GoldenTree Productions, and researchers from the ESI, in a unique event, Weather the Storm, in Porthleven. The production will lead people though the town and will ask ‘How can we weather the storm?’  To create the performance, the artists and performers spoke to local residents, harbourmasters, fishermen, the National Trust, policy-makers and surfers.

The performance builds on earlier work StormSongs in which a contemporary sea shanty was developed based on people’s experiences of the storms in 2013-2014.

Natalia Eernstman, Project Manager for GoldenTree said: “However hard we try to preserve paths, harbours, houses, beaches, livelihoods and lifestyles, change is inherent to our coastal experience. This type of performance is a powerful way to explore these issues of change and using people’s own ideas and experiences. We want to know what to hold on to and what to let go of, when we are loosing ground to the sea. When do we brace ourselves and when do we yield? How do we deal with the ever-changing unpredictable entity that is the sea?”

The Porthleven performance forms part of a week-long series of events that includes the screening of S.A.F.E Kenya’s most recent film WATATU at the ESI, an introduction to the world of morris dancing and a behind the scenes visit to the Eden Project.

S.A.F.E. Kenya has a long and successful track record of using street theatre techniques to explore issues such as HIV, water quality and sanitation. The charity has a number of high profile patrons including James Bond star, Daniel Craig.

Members of the public are invited to join actors from SAFE Kenya, alongside director Nick Reding, at the Cornish film premier of WATATU. The screening is free and takes place at the Environment and Sustainability Institute at the University’s Penryn Campus on Wednesday 30th September from 18.30.  The film examines the relationships between different communities and cultures in modern day Mombasa, the anger and radicalisation of young people, and the solutions that can be found to unite them.