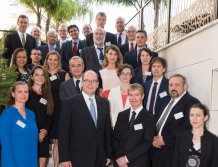 Professor Kevin J Gaston, Director of the Environment and Sustainability Institute, was among a group of international biodiversity and Antarctic experts asked to contribute to a three-day meeting in Monaco on the future for, and biodiversity of, the Antarctic and the Southern Ocean.

The central purpose of the historic meeting, convened and hosted by HSH Prince Albert II of Monaco, was to examine the extent to which conservation of the biodiversity of Antarctica and the Southern Ocean is realising a set of ambitions agreed as part of the Strategic Plan for Biodiversity 2011-2020. This plan was previously approved by the Parties to the Convention on Biological Diversity. The meeting also aimed to provide guidance for action that can effectively help deliver further conservation successes for Antarctica and the Southern Ocean. An additional goal was to identify key areas for work and indicators to help guide that work.

In providing HSH Prince Albert II of Monaco, members of the Monaco government, and other dignitaries with a synopsis of the outcome of the meeting, Professor Steven Chown of Monash University, co-organizer of the meeting, said: "the initial expert assessment indicates a biodiversity outlook for Antarctica and the Southern Ocean which is no better than that for the rest of the globe."

While such an outlook is disappointing for a region so remote, apparently pristine, and theoretically well-protected, the prospects for effective action over the next five years to improve the situation dramatically are exceptional. Under the broader Antarctic Treaty System an excellent set of governance arrangements exist that could give swift effect to improvements.

HSH Prince Albert II of Monaco emphasised in his concluding speech that: " … activity in the Antarctic region has increased substantially. This growth includes not only fishing and tourism, but also some scientific activities." Thus, an assessment of progress against the global goals and targets is timely and much-needed.

In concluding, HSH Prince Albert II of Monaco noted: "I am convinced that common action from all countries and parties, can improve the situation for the better ... I can assure you that my Government and my Foundation will make every effort possible to ensure that science continues to prevail in this land with international cooperation."

Professor Gaston added: "It was a privilege to be asked to contribute to this meeting. Everyone present expressed the hope that it will provide us all with an opportunity for co-learning and enhanced conservation of the Antarctic."

The outcomes and products of 'Antarctica and the Strategic Plan for Biodiversity 2011-2020: The Monaco Assessment' will be made available over the next several months. These outcomes will be conveyed to, among others, the Antarctic Treaty Parties, the Parties to the Convention on Biological Diversity, and the broader public. Moreover, they will form the basis of a plan for further improving conservation in Antarctica and the Southern Ocean.