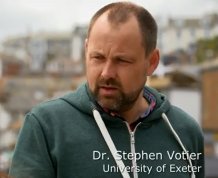 Dr Steve Votier, talking to Lucy Cooke on the sea-front at St Ives.

The ESI’s Dr Stephen Votier, senior lecturer in the Natural Environment, ornithologist and seabird expert, was featured in conversation with zoologist, film-maker and presenter, Lucy Cooke, on BBC on Sunday, January 25.

The programme, ‘Nature’s Boldest Thieves’ examined the way in which common UK wildlife – badgers, foxes, gulls, squirrels – are not just becoming expert in co-existing with humans, but are actively thriving by virtue of increased boldness and, in the case of gulls, by perfecting their food-stealing techniques.

In addition to the various experiments and surveillance run to examine the habits of scavenging mammals (including images of a fox made overweight by the richness of the available pickings), herring gulls in St Ives were tagged and tracked to find out whether scavenging expertise was common to many or a skill in which fewer excelled.

In a busy, summer-time lunch-hour on the St Ives sea-front, photographers – Biosciences undergraduates from the University’s Penryn Campus –  captured a number of swoop-and-snatch attacks on the unwary eaters of pasties and ice-creams. What their records of the raids showed was that one ringed male (Bird 195) was responsible for almost half of such attacks.

Dr Votier told Lucy Cooke: “There are some individuals which are repeatedly performing the same behaviours. We’ve suspected this for quite a while, but there’s a big difference between suspecting something to be the case and having some pretty clear evidence to back it up.”

Speaking later, he added: “What’s particularly interesting about this is that populations of generalists, like gulls, are often comprised of individuals that become specialised. This is significant because it has implications for the way in which we understand interactions with humans and the potential for conflict.”

You can watch the programme on the BBC iPlayer.