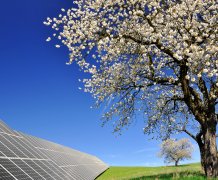 Pioneering new research could pave the way for solar energy to be converted into household electricity more cheaply than ever before.

A team of experts from the University of Exeter has examined new techniques for generating photovoltaic (PV) energy – or ways in which to convert light into power – more cost efficiently.

The global PV market has experienced rapid growth in recent years due to renewable energy targets and CO2 emission controls.

However, current, widely-used commercial methods employed to generate PV energy, such as using silicon or thin film based technologies, are still expensive as they are processed through vacuum-based techniques. The development of technologies and the invention of new materials could lead to the reduction of PV energy generation costs.

Now, the team of scientists from Exeter has examined that one such material, a mineral called perovskite, could hold the key to cheaper PV energy generation in wider climates.

Crucially, the team conducted studies with perovskite in Alta Floresta (Brazil), Frenchman Flat, (USA) , Granada (Spain), Beijing (China), Edinburgh (UK) and Solar Village (Saudi Arabia), and confirmed its efficiency in converting light to power in a range of atmospheric conditions, rather than just under direct sunlight.

The research by the team from the Environment and Sustainability Institute (ESI), based at the University of Exeter’s Penryn Campus in Cornwall, is published in the journal Solar Energy Materials & Solar Cells.

Professor Tapas Mallick, who was involved in the research said: “This research offers the potential for significant progress to be made in finding cheaper ways to generate PV energy. The results, which show how perovskite devices work under real operating conditions, will lead to our understanding them better, which will benefit industrial-scale production processes.

“Given concern on large-scale solar farms across the country, such techniques will be key to understand how the Perovskite technology integrates within our building envelope”.

Dr Senthilarasu Sundaram, also from the ESI, added: “The research is questioning the perovskite material’s ability to produce stable solar cells under versatile climatic conditions. The obtained results are very crucial in terms of perovskite solar cell growth and understanding how to make better devices.”