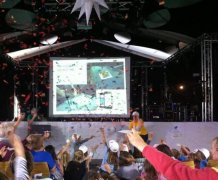 Dr Kate Smith creates an eruption during her interactive talk about volcanoes.

Scary Science in the Square

Visitors to the University of Exeter’s annual Science in the Square event found out that while nature might sometimes seem scary, science can help make sense of terrifying phenomena as diverse as erupting volcanoes and intestinal parasites.

The event, run by staff and students based at the College of Life and Environmental Sciences on the Penryn Campus, took place last Friday, August 14th, as part of the annual Falmouth Week festivities. This is the fourth year that Penryn Campus volunteers have organised this afternoon of free, fun, and educational science outreach.

Well over 2,000 guests took advantage of the wide range of activities and displays on offer. Among other things, visitors were challenged to build earthquake-proof structures out of edible materials, identify animals by looking only at their skulls, and pluck up the courage to hold live snakes. Younger visitors could get nature-inspired art painted on their faces and make science-themed crafts to take home with them.

Throughout the afternoon, University of Exeter scientists gave interactive presentations on their areas of expertise, ranging from marine wildlife to the chemical defences that plants use to discourage herbivores from eating them. During each talk, young audience members had an opportunity to both ask and attempt to answer questions posed by the researchers.

Professor Brendan Godley, Director of the Centre for Ecology and Conservation, described the afternoon as “a fantastic experience for both visitors and hosts”.

He said: “Families were queuing outside the marquee well before the doors opened at noon. Many of them had attended previous Science in the Square events and had come back for more after having a good time in past years.

“The children are incredibly enthusiastic, and also impressively knowledgeable. I think they enjoy the opportunity to show off how much they know, and, in return, interact with some of the world’s experts in these areas of research.

“By having such a diverse range of volunteers at our booths—both men and women from all career stages and from around the world—we hope to send the clear message that science is for anyone and everyone. We’d love to see these kids again one day, as students at the Penryn Campus!”

Photographs from the day can be viewed on the Science in the Square Facebook page.