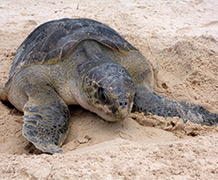 A new study from the University of Exeter has revealed that the Central African country of Gabon is providing an invaluable nesting ground for a vulnerable species of sea turtle considered a regional conservation priority.

A huge ground survey covering nearly 600 km of Gabon’s coastline has uncovered the largest breeding colony of olive ridley turtles in the Atlantic. The study, published today in the journal Biological Conservation, is the first to combine existing monitoring data with a back-to-basics coastal survey of the area. The results suggest that Gabon hosts the most important rookery for this species in the Atlantic, with estimates indicating that there could be up to 9,800 turtle nests per year compared with around 3,300 in French Guiana and 3,000 in Brazil.

Olive ridley turtles are one of the smallest of the sea turtles and are named for the greenish colour of their shell and skin. Although considered the most abundant of the marine turtles, there has been a net decline in the global numbers of the species, such that they are currently listed as ‘vulnerable’ by the International Union for Conservation of Nature (IUCN).

Although a considerable proportion of nesting occurs within protected areas in Gabon, a range of illegal activities and external pressures continue to exist highlighting the need for continued conservation efforts.

Dr Kristian Metcalfe, lead author from the Centre for Ecology and Conservation (CEC) at the University of Exeter who undertook the coastal survey with colleagues, said: “Conservation efforts for sea turtles can be hampered by their migratory life cycles, which carry them across jurisdictional boundaries and international waters. That makes this first population assessment which covered extensive areas of Gabon’s coast outside of monitored regions all the more valuable and worthwhile, and demonstrates the importance of focusing beyond intensively monitored beaches”.

Co-author Professor Brendan Godley from the CEC stated: “There have been increasing calls for improved sea turtle data at a local and regional scale to help inform conservation assessments. Our study goes some way to providing the data needed and will help us understand sea turtle distribution, density, population trends and threats as well as allowing the people of Gabon to manage their marine resources more sustainably”.

Co-author Dr Matthew Witt from the Environment and Sustainability Institute (ESI) at the University of Exeter added: “These findings further emphasise the regional and global importance of Gabon’s nesting sea turtle populations and places the country in a better position to support and implement measures to protect them”.

The data generated as part of this study was used to inform the development of a new network of marine protected areas covering 23% of Gabon’s Exclusive Economic Zone that was announced at the 2014 IUCN World Parks Congress in Sydney, and was supported by funding from the Darwin Initiative (Project 20009) through the Department for Environment, Food and Rural Affairs (Defra) in the UK, with additional support provided by the Wildlife Conservation Society (WCS), Tullow Oil, Waitt Foundation, Worldwide Fund for Nature (WWF) and the Gabon Sea Turtle Partnership (PTMG), a regional network including Agence Nationale des Parcs Nationaux (ANPN), Aventures Sans Frontieres (ASF), Centre National des Données et de l’Information Oceanographiques (CNDIO), Fondation Liambissi, and Ibonga which are supported by funding from the Marine Turtle Conservation Fund.