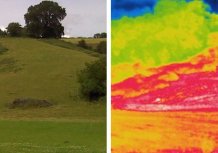 The pilot growing site, seen as a standard and a thermal image. By Jonathan Bennie.

The year of growing bananas

An exhibition in the ESI’s Creative Space acts as a focus for a year-long collaboration called Foreign Soil: an attempt to grow edible dessert bananas outdoors in the UK.

As part of a wider consideration of human and plant adaptability, artist and scientist Dr Jonathan Bennie, supported by the ESI/RANE Creative Exchange Programme, have mapped and modelled relevant microclimates at a pilot growing site, Easterbrooks, a south-facing pasture at West Town Farm, near Exeter.

Their interest in the different layers of scientific and non-scientific knowledge there might be about a site led them to consider ways of enhancing the heat and humidity of its microclimates through physical manipulation, and to make predictive temperature models. They also talked to the farmer and farm workers who knew the land well and took members of the public on tours around it.

Extending this public-facing aspect, they shared data with educationalists leading school trips, grew supermarket-variety bananas from plug plants to create stock for future outdoor planting and spoke to many people about how bananas could – or maybe couldn’t – be grown in the UK.

As an artist, Gabrielle has licence to pursue an enquiry that would normally be considered unworthy of a scientist's attention. Meanwhile, scientific process gives traction to an idea that might otherwise be dismissed as fanciful.

As a scientist, Jon has been looking for new ways to understand and visualise the complex spatial and temporal patterns of microclimate within landscapes, and their biological and cultural effects.

Gabrielle says: “This collaboration has highlighted the different kinds of knowledge that may exist in relation to a growing site – from the farmer’s insights, built by living and working on the land over many years, to the remote analysis and visualisation offered by virtual models.”

The exhibition is open in the ESI's Creative Space until 15 April 2015, Monday to Friday from nine until five. Foreign Soil was developed in partnership with OrganicARTS and West Town Farm.