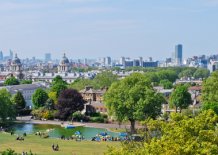 Eyes on the horizon

The Director of the Environment and Sustainability Institute (ESI), Professor Kevin J Gaston, has co-authored the research, which took the form of a ‘horizon-scanning’ exercise. This systematic process was undertaken by experts from wide-ranging disciplines. These experts took part in a three-day workshop, consulted peers and used social media to identify threats likely to emerge, rather than just to name existing threats at risk of worsening.

The ten identified threats tended to fall into the category of resulting either from technological advances (solar panels, for example, as well as light-emitting diode lights and self-healing concrete) or from the impact of human behavioural change: the huge rise in the volumes of scattered cremation remains, especially in Asia, for example, or our desire and need to use urban green spaces.

To focus on the latter, it’s an emerging paradox that the benefits to city dwellers of connecting with nature are well understood. However, that same usage poses a threat to the biota (the entire animal and plant life of a particular region or habitat) of those same green spaces.

The research highlights other apparent contradictions. Solar power’s long-term benefits are also well known, but some cities – like Seoul, South Korea – are looking at massive installations of photovoltaic cells on city roof-scapes and other surfaces.  Such accumulations risk the creation of a massive source of polarized light which could have consequences for many species’ ability to navigate, orientate, reproduce and predate, with unknown ramifications for food webs and ecosystems .

The aim of such research is to help mitigate adverse outcomes through research and management before threats become widespread.  There was no suggestion that technology associated with (for example) solar panels be restricted in urban areas, since these advances have environmental benefits, nor that city dwellers should withdraw from green spaces.

Professor Gaston said: “Given the speed of technological advancement and the increasing demands of urban populations, horizon-scanning should be conducted routinely, to identify emerging threats to urban ecosystems. Such scans have great potential to act as catalysts for research to determine the likelihood and magnitude of these possible threats.”

More information and an abstract are available here.