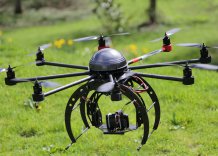 Giving the Lords the low-down on drones

Dr Karen Anderson, Senior Lecturer in Natural Environment, recently presented to the Parliamentary and Scientific Committee’s Breakfast Discussion Meeting  on ‘Drones and How to Control Them’.

Dr Anderson, who set up and runs the ESI DroneLab facility, was invited to talk about drones’ scientific uses; she gave examples of how they’re currently being used in research projects and in applied research with broad stakeholder groups.

Karen was joined at the discussion, chaired by Stephen Metcalfe MP, by two other speakers:  Ashley Bryant of Vtol Technologies, University of Reading, and Tony Henley, from the Royal Aeronautical Society. Her expertise was a useful complement to their more regulatory-based input and was well received by a varied audience, which included interested companies, other university representatives as well as MPs and members of the House of Lords.

The Lords had only recently discussed drones, during which debate they had identified a lack of information with which to counter the media’s current negative portrayal of the technology. The feedback Karen received was that her contribution had done much to correct this information-gap and given attendees valuable insights into drones’ usefulness, both present and potential.

Dr Anderson said: “I was delighted to be invited to this discussion, and equally pleased by how it went and the reaction I received. It was a positive experience, as a result of which I’d certainly recommend others to present to such committees if given the opportunity.”